The devastating bushfires in Australia will impact the country’s gross domestic product growth, although this will ultimately be offset to some extent by rebuilding efforts in the aftermath.

ANZ Research expects the immediate impact on GDP over the final quarter of 2019 and the first quarter of 2020 will be negative but unlikely to be beyond 0.1 to 0.2 percentage points in either period.

This is necessarily a best first guess and will be refined as more information comes to hand.

The size, intensity and duration of the current Australian bushfires mean they will almost certainly have a larger economic impact than past fires. Previous major bushfire events have had a negligible effect although loss of property is not captured in the calculation of GDP.

Only short-term negative impacts on tourism, retail and employment at the national and state/territory level have been observed – although this masks the severe impacts at local/regional levels.

The effect on consumer sentiment is likely to be a key driver of the economic impact at a national level. Recent ANZ Job Ads and ANZ-Roy Morgan Australian Consumer Confidence reports provide an early signal of an identifiable economic impact.

While national disasters are more appropriately an issue for fiscal - rather than monetary - policy, there may be a case for a monetary policy response if the fires trigger ongoing national effects. As it happens, ANZ Research is already forecasting a 25 basis point cut from the RBA in February.

“The size, intensity and duration of the current Australian bushfires mean that they will almost certainly have a larger economic impact than past fires.”

At publication, more than eight million hectares have been burnt during the bushfire disaster. At least 25 lives have been lost and more than 2,000 homes have been damaged or destroyed.

More than 100,000 livestock may have perished and at least 480 million wild animals are estimated to have perished or been affected.

Physical and mental health impacts (including from smoke which has spread as far as South America) and the effects from loss of social infrastructure and community will emerge over the longer term.

Research suggests the economic effect at the national level of past bushfires has not been significant. The report Floods, Bushfires and Sectoral Economic Output in Australia, 1978–2014 empirically determines whether bushfires and floods have an impact on Australia’s overall gross value added during that period.

Although the report found floods reduce total output, it did not find an overall impact from bushfires. The loss of homes, businesses, revenue and livestock, while often devastating, in an economic sense appeared to be largely offset by reconstruction works and government support.

However, at a sector level, the report found bushfires negatively impacted three service subgroups (construction, transportation and the financial-insurance sector) and positively impacted two service groups (utilities and retail). Agriculture surprisingly has not been significantly impacted.

At face value, this suggests the impact on the national economy will be small, though with more meaningful implications for regional economies and across sectors.

This doesn’t take into account the potential impact on sentiment. The ANZ-Roy Morgan Australian Consumer Confidence survey for the first weekend of January showed a significant decline in confidence about the economic outlook. This pushed overall confidence to its lowest level in more than four years.

At a time when consumer spending is at four-year lows, the hit to sentiment from the fires and associated smoke may mean this season’s disaster has a bigger impact than those in the past. 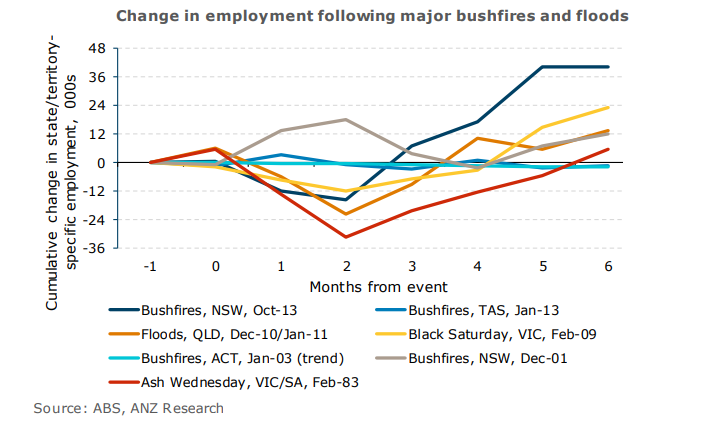 Regional workers and communities are likely to bear the brunt in 2020, particularly in industries such as tourism.

With the most catastrophic fire days coinciding with the peak holiday period, this will be especially damaging for workers and towns that rely on tourism for a significant chunk of their annual revenue and employment.

The 6.7 per cent month-on-month fall in ANZ Job Ads in December supports this forecast. This was the largest monthly decline since May, which was affected by public holidays and the federal election.

In the final two weeks of December the number of job ads declined by more than we expected for that time of the year, suggesting the bushfire crisis was a contributing factor.

The impact of major disasters on business conditions is inconclusive, but conditions fell swiftly and steeply in Victoria following Black Saturday and in Queensland following the 2010/11 floods.

The hit to the tourism industry will also have a material impact on affected regional areas. However, it is unlikely the impact on tourism spending will be significant enough to influence national GDP.

The 2010/11 Queensland floods are estimated to have cost that state around $A590 million, less than 1 per cent of annual tourism expenditure in Australia.

Domestic tourism is likely to take a harder hit, for two reasons:

• Domestic tourism makes up around three-quarters of every tourism dollar spent in Australia.

This is even more pronounced in the regional areas where bushfires mostly occur. Domestic tourists accounted for just over 92 per cent of all regional tourism expenditure in New South Wales and Victoria for 2018/19, as well as almost 90 per cent Australia wide.

• Domestic tourists can respond to disasters by staying home whereas international tourists cannot.

Any impact from fires deterring international travellers will be less immediate. For the areas concerned, however, the loss of domestic tourism will be significant. Facilities have been destroyed and the rebuild will take time. This will deter domestic tourists from visiting for some time.

The Queensland floods provide a possible lower bound for the overall cost of this. How much higher costs could go is very difficult to say.

At this stage, ANZ Research believes the loss of international tourism spending will likely be modest. The risk that spending by tourists already here will have fallen sharply doesn’t seem likely.

Around 93 per cent of international tourist spending in Victoria and New South Wales is in Sydney and Melbourne, neither of which has been significantly impacted by the fires. In terms of the future impact from slowing international tourism numbers, the evidence is not definitive.

Following the 2009 bushfires, one of the worst in Australian history, tourism arrivals grew strongly before collapsing and recovering by year end. It is hard to re ad much into this as it coincides with the global tourism trend in 2009, when international arrivals fell 4 per cent following the GFC.

The Queensland floods started when arrivals had already fallen, although arrivals did fall slightly further before quickly recovering.

At this stage, the overall impact of this season’s fires on international tourism will likely be limited and a material decline in service exports for Q4 and Q1 is not expected.

The risks to this are if the fires continue and prompt significant numbers of tourists to cancel trips.

Major bushfires and floods in the past have had a consistent but short-lived effect on retail sales. In nine of the last 11 major fires/floods, monthly retail growth during the peak months of the fires/floods was lower than the average for the six months before. However, the six months following the events generally showed a recovery.

Total retail sales were most affected by the Ash Wednesday fires in South Australia and Black Saturday fires in Victoria, with each state seeing a two percentage point downgrade in the month of the fires compared with the average for the previous six months.

The Townsville floods in 2019 and Black Christmas fires in 2001 didn’t show a negative retail effect because retail sales tend to be concentrated in capital cities and other larger cities. Overall figures cannot be read as indicating no effect in the immediate and surrounding regions.

Indeed, retail declines in the immediate regions of all fires/floods are likely to be much larger than the state-wide data suggest.

Within total retail, two categories were particularly affected by fires/floods. During most of the major bushfires and floods, fashion sales in affected states saw substantial growth downgrades.

In South Australia, the downgrade during Ash Wednesday was around nine percentage points compared to the previous six months but there was no apparent state-wide impact in Victoria. Strong effects in Tasmania and the ACT were also seen during their respective fires.

As with other categories, a recovery over the next six months suggests the effect on retail growth was short-lived.

This story is an edited version of an ANZ Research report. The full report, Australia’s bushfires greater economic impact, is available to registered clients on ANZ Live here.