January 25 marks the beginning of the new Lunar Year- the Year of the Rat. As the first of the 12 Chinese zodiac animals, the rat represents intelligence and abundance. It is also a resilient and vigilant creature which can survive in adverse conditions.

The attributes of the rat will be widely upheld in China in 2020. Chinese President Xi Jinping is aiming for economic resilience amid continued global uncertainty. However, the government wants to implement structural reforms without jeopardising its key goal of ‘rejuvenating’ the nation.

ANZ Research expects China to try to save every bullet in its economic arsenal in 2020. Externally, it will avoid confrontations and secure a trade deal in exchange for stability. Domestically, it will continue to clean up financial risks and refrain from massive stimulus measures.

Despite the current optimism over improving US-China trade relations there are still factors that could impact economic sentiment, both positively and negatively.

Against such a backdrop, below are 10 predictions on areas worthy of attention in the New Year. 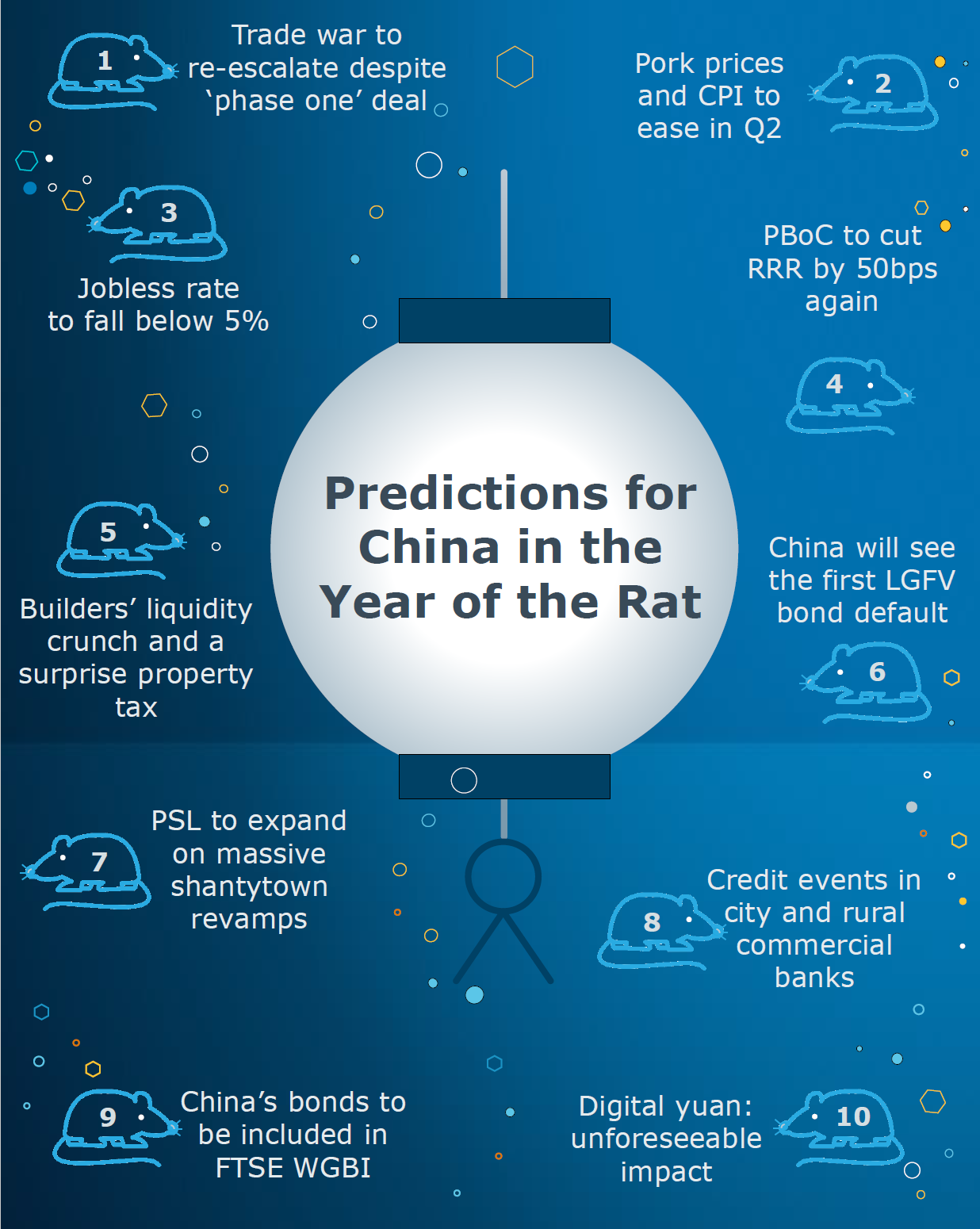 “ANZ Research expects China to try to save every bullet in its arsenal in 2020.”

The ‘phase one’ deal between the US and China is merely a truce with no material reduction measures, despite China’s promise to buy more agricultural products and the removal of the US-placed label on China as a currency manipulator.

The US has shown no sign of softening its stance on national security issues surrounding technology, while China is prepared to play the long game given the improvement in macro indicators.

The next phase of talks may involve actual concessions on tariffs but China needs to show proof of progress in compliance with US requests, which could take a longer time.

CPI to ease on pork

Chinese consumer inflation is likely to peak in the first quarter. Food prices typically push the headline consumer price index up in the month of Chinese New Year; it was at least 1.0 per cent in the past 10 years. China’s pork prices rocketed 97 per cent in December due to the swine fever outbreak.

ANZ Research expects the pork price to stabilise after May 2020. Hog stock typically leads pork prices by six months. A rebound in hog stock in November means the impact on prices will be visible only in the second quarter of calendar 2020.

Aside from a softening in pork prices, the recent oil price spike amid US-Iran tensions will likely lift China’s CPI by 0.3 percentage points. ANZ Research expects Chinese CPI to average 3.5 per cent in 2020.

Improved sentiment following the trade truce will bolster China’s manufacturing outlook. There are already signs of improvement in industrial prices as well as upward pressure on core inflation which bodes well for employment.

The current surveyed unemployment rate in urban areas is 5.1 per cent. With the improved inflation outlook, ANZ Research expects the jobless rate to fall back to below 5.0 per cent in 2020.

The change in jobless rate over its previous year average can reflect China’s business cycle, as it corresponds to changes in core CPI and the producer price index.

The PBoC will cut rates – again

China’s reserve requirement ratio (RRR) for major banks remains at 12.5 per cent. But there is still a gap of five percentage points compared with the level in 2006, the year before China started its RRR hiking cycle.

ANZ Research expects another 50 basis point RRR cut before year-end following the cut in January. This will lower RRR for major banks to 12 per cent.

Assuming M2 money supply growth is at 8.5 per cent and the monetary base is stable at CNY31trn, the money multiplier will be lifted to 6.9 after a total of 100bp RRR cuts in 2020.

A property tax has been under consideration in China for the past few years. Any introduction of this will add further strain on the sector.

Expectations for the first actual local government funding vehicle (LGFV) default have risen significantly since late 2019, on the back of several delayed payments. In 2020, LGFV debt repayment pressure is mounting for several provinces, including Tianjin, Jiangsu, Chongqing and Hunan.

The first LGFV default would impact market belief in the implicit government guarantee. Subsequent defaults will likely follow. Since LGFVs are an important financing source, local fiscal capacity will be hit.

The risks of default have risen as the fiscal conditions of local governments worsen.

The Chinese government’s three-year plan to build 15 million housing units by end-2020 means 5.5m new units will be added this year alone, almost double that in 2019.

Pledged supplementary lending (PSL) is designed to provide funding support to shantytown projects. Previously criticised as a way of ‘housing monetisation’, its scale will likely expand in 2020.

The incremental PSL will increase China’s monetary base. PSL funds can be injected into selected banks to provide loans to specific sectors, including urban redevelopment, agriculture and small business

The BaoshangBank takeover in 2019 ushered in a wave of regulations across local banks. China’s total non-performing loans (NPL) are expected to increase by 1.25 trillion renminbi in 2020, based on C3.8 trillion of special mentioned loans and 33 per cent NPL mitigation rate.

Rural banks have the highest NPL ratios and the smallest loss provisions. More credit events will likely occur in 2020 as the authorities have increased regulatory oversight and restricted their business scope.

Overall, ANZ Research expects regulatory actions to be able to contain the associated financial risks to reduce spillover effects in 2020.

China onshore bonds have attracted foreign inflows since their inclusion in the Bloomberg Barclays Global Aggregate index in April 2019. JP Morgan will also include China bonds in its GBI-EM starting February 2020.

ANZ Research expects FTSE Russell to add Chinese bonds to its WGBI after an assessment in March 2020.

Expect monthly bond inflows to average $US11 billion in 2020, lifting the foreign ownership of CGBs to 10 per cent before year-end, from 8.6 per cent at end-2019.

China has made progress in opening up its market, such as the removal of investment limits and facilities for overseas funds transfers. It has also appointed the first (non-Chinese) yuan clearing bank in Japan; this will increase cross-border yuan transactions between the two countries.

China aims to be the first major country to launch a central bank digital currency (CBDC). In late September, PBoC Governor Yi Gang said that there was no fixed timeline for its launch yet.

The digital yuan is expected to facilitate retail payments as it will be launched on a mobile wallet app. In 2019, mobile payments were more than three times China’s GDP.

The digital yuan will gain quick acceptance, in ANZ Research’s view. However, the longer-term impact of new technology is often unpredictable.