With the heroics of July’s FIFA World Cup rapidly fading, attention will soon turn towards Japan, host of the 2019 Rugby World Cup and then the 2020 Summer Olympics. Beyond the sporting arena, our focus should also be on Japan for much more fundamental reasons. Japan has laid out a roadmap for dealing with an ageing population that a growing list of other countries will increasingly have an interest in. We all have a stake in Japan’s demographic alchemy succeeding.

Japan’s population began falling in 2010 (Figure 1). Japan is already the world’s most aged society, with 27% of the population over 65, and projections suggest that the country’s population will decline from 127 million today to below 88 million by 2066 and around 50 million in 2115. That is about where it was a century earlier.

Significantly, the International Monetary Fund (IMF) has identified 2018 as a new point of no return for Japan’s demographics. This year, the second generation of Japanese baby boomer women are passing their reproductive age. The demographic challenges are enormous.

Japan’s ageing dilemma has been elevated to the highest priority in the slow moving structural reforms of Prime Minister Shinzo Abe’s eponymous Abenomics national renaissance program. This ‘third arrow’ aims to transform not just the economic policy approach to a shrinking population, but the thinking that underlies it by merging “cyberspace and physical space”. 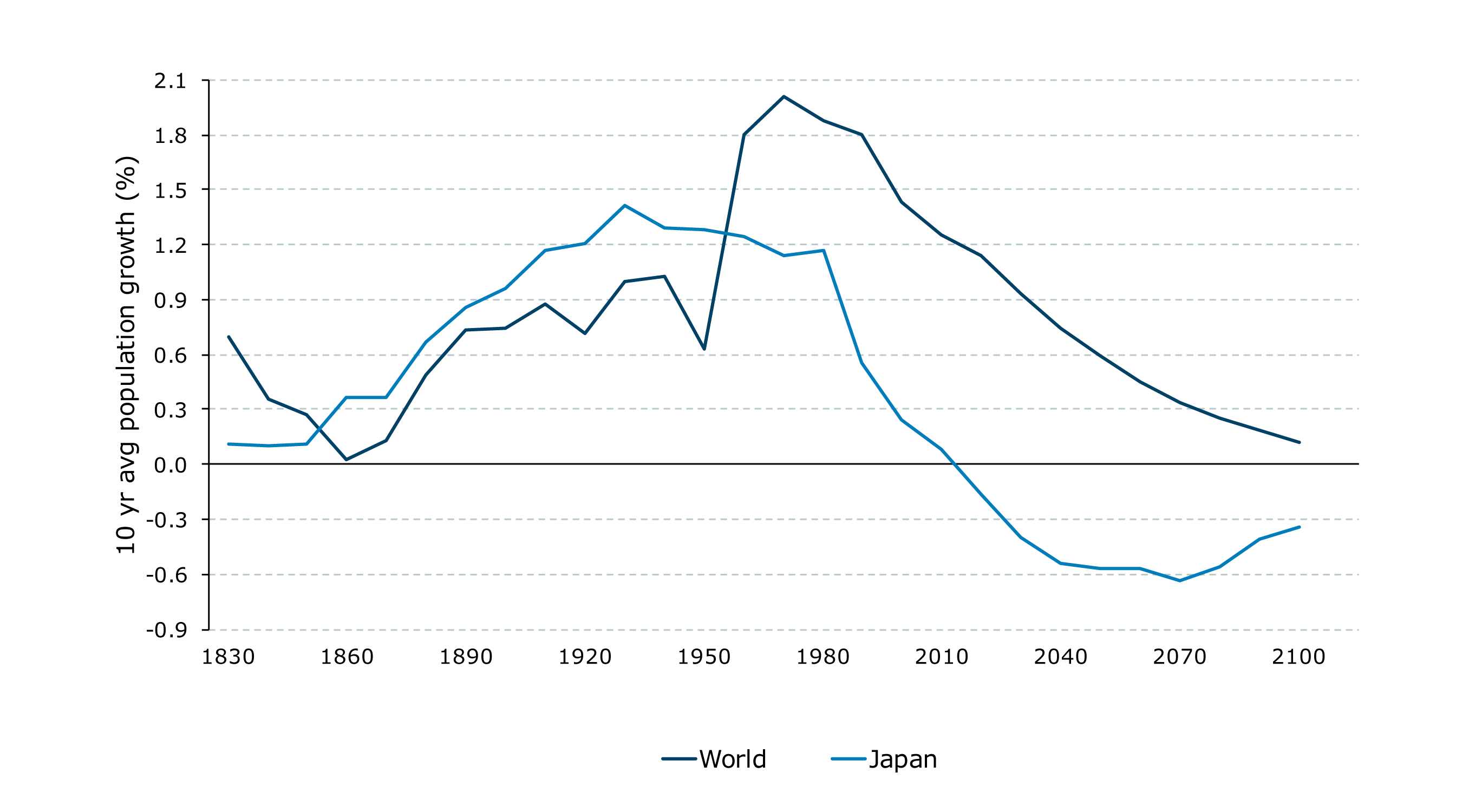 The two main programmes in the ‘third arrow’ are:

Some analysts have lamented the lack of hard economics underlying these policies, but Mr Abe sees them as critical components of future growth. As well, it must be said that conventional economics has done a poor job of anticipating and responding to the challenges of the post-financial crisis world. Weaker trend GDP growth, scant wage increases and challenges to industrial legacy are issues that conventional approaches are struggling to cope with.

Behind the political rhetoric is a subtle, but noticeable, shift in thinking about Japan’s ability to revive its industrial culture of continuous improvement, or kaizen, to end the negative mindset about population decline. The Tokyo Foundation for Policy Research has found that Japan’s strongest periods of economic growth are more correlated with productivity increases than increases in either the population or labour force participation. And suggesting that an economy with a declining workforce could turn to technology investment to maintain productivity, the Bank of Japan has argued that industries facing the biggest shortfall of workers were most actively investing in labour saving information technologies.

Japanese optimism aside, there are serious questions as to whether Abe’s policies and vision for a new society can indeed deliver sustained economic growth despite a declining population. At its heart, the “Human Resources Development Revolution” is a conventional public spending initiative, funded by a long-debated consumption tax increase, designed to head off the rise in the dependency ratio in line with the IMF warning that the window for such interventionist action is closing.

Japan may be the only major economy that doesn’t fear the rise of technology; in fact it welcomes it.

In contrast, Society 5.0 actively challenges the conventional wisdom that an ageing demographic profile with a rising dependency ratio leads to secular stagnation. Instead, it presupposes that the impact of demographic decline can be offset through the application of advanced technology like artificial intelligence, the Internet of Things and big data across all areas of society, including healthcare, mobility, housing and resources.

It is banking on the country’s technology strengths and on the assumption that AI will support rather than displace human workers, meaning Japan will not face the structural adjustment challenges countries with younger populations may. In this respect, Japan is in quite a unique position. Japan may be the only major economy that doesn’t fear the rise of technology; in fact it welcomes it.

There are still questions on how these new programmes will be implemented. The Abenomics renaissance has so far been excessively dependent on the Bank of Japan’s extraordinary monetary stimulus policy, which is now running into limits, whereas the new policies will require much greater coordination across government and industry.

Japan has demonstrated a surprising new openness to the forces of globalisation. Consider Japan’s increased pragmatism towards foreign nationals with the number of foreign workers almost doubling between 2012 and 2017, its booming and efficient inbound tourism industry and its leadership of a revamped Trans-Pacific Partnership trade deal. Japan has also proved it can change traditional workplace gender imbalances, increasing its prime-age female labour force participation rate from 66.5% in 2000 to 77.5% in 2017. On this issue Japan has now overtaken the US.

The combination of a reinvigorated culture of industrial excellence with the looming power of artificial intelligence, may be giving Japan the opportunity to develop a new roadmap for dealing with the economic impact of ageing. With most western countries and many emerging markets beginning to face similar issues, many have a stake in Japan’s success.

ANZ has received approval for a securities license in Japan from the Financial Services Agency (FSA), further strengthening the bank’s Institutional business in Japan.

The ANZ Research Quarterly navigates a global cycle where the risks seem to be rising, rather than diminishing.