Despite the damage wrought by COVID-19 to the global economy, political scientist Ian Bremmer is optimistic about the future – one he thinks is “set to be much-more robust than even [markets are] pricing in.”

Speaking at the ANZ Economic Outlook Series - Geopolitical Predictions for 2021 virtual event, Bremmer said the success of vaccine production and rollout so far around the world meant “we’re going to be able to defeat" the pandemic.

That means “given the pent-up demand in the wealthy world, it really bodes very, very well for where we will be at the end of 2021,” he said.

“This crisis has been sufficiently large to create opportunity, both on the private sector side and increasingly on the public sector side too.”

ANZ’s Head of Asia Research, Khoon Goh, said the current vaccine rollouts mark the beginning of the end of the pandemic.

“While economic growth in Asia will rebound strongly, the pace will be uneven as different countries will achieve herd immunity at different times,” he told ANZ Institutional. “Sectors reliant on international travel will be last to see any meaningful recovery.”

The speed at which the cycle has shifted has been remarkable, ANZ Chief Economist Richard Yetsenga said.

“The economic cycle has matured quickly and we have moved from recovery phase to expansion phase,” he said. “In many economies, gross domestic product and unemployment have returned – or soon will return – to pre-pandemic levels and bond markets have priced in higher inflation”.

Bremmer, the President and Founder of Eurasia Group and GZERO Media, said despite his optimism, geopolitical issues are not going away, particularly tensions across the US, China, and even Europe.

In the US, there are promising economic developments on the horizon, Bremmer said, including the injection of additional stimulus.

“Four to five trillion dollars of additional cash, in a low-interest environment, coming into the world’s largest economy… it is something that just makes the market incredibly excited.”

US GDP growth for 2021 have been revised higher, with ANZ well above consensus

Bremmer said China is poised to continue its upward trajectory after its quick action at the beginning of the pandemic ensured it was the only major economy in the world to record growth in 2020.

“China did a great job [getting] their supply chains back up and functioning within months” of the pandemic first hitting, he said, noting the country was functioning again “by May of 2020".

"It was extraordinarily successful and indeed, led to growth,” Bremmer said.

Goh said supply chains through Asia are continuing to shift as as a result of geo-political tensions and this change has been exacerbated by the pandemic.

“As countries and corporations seek to build resilience in their supply chains, many ASEAN countries are expected to benefit from these shifts,” he said. “The signing of various free-trade agreements like the RCEP and CPTPP will help accelerate those supply chain shifts and see a rise in FDI inflows into Southeast Asia.”

In Europe, the regional political environment looks better for markets, although a post-Brexit United Kingdom may find itself increasingly isolated, Bremmer said.

“The fact is the Eurozone and European Union have taken lessons from previous crises and they are responding to the coronavirus as one European Union,” he said.

Bremmer said the collective response to the COVID-19 vaccine – “everybody rowing together” – had helped ease some rising euroscepticism, blunting the populism which had concerned markets in Europe before the pandemic. “For 2021, Europe looks pretty good,” he said.

Despite this success, three critical parts of the global economy – the US, China and the European Union – are being driven further apart, not closer together, Bremmer said.

That means "global coordination is going to be more challenging to come by – on climate, on technology, on the pandemic, on the future of globalisation", he said. “And that is of course a challenge for the people who are investing in this environment.”

Ongoing difficulties in the relationship between the US and China were a continued threat to globalisation, Bremmer said.

“Multinational corporations thought over time everything was heading toward faster and faster trade of goods, and services, and people, and ideas, and data across borders all over the world,” he said. “That trajectory is shifting.”

“A backdrop of unprecedented government support, resultant huge liquidity, a lack of the previously predicted structural damage are all pointing towards an expansionary environment,” he said.

“In a forward-looking sense there will be winners and losers, with a relatively lower level of correlation across risky assets than we have seen in the previous decade.“

“As banks, private funds and real money investors position to invest where their perceived tailwinds support allocation of capital, it makes for interesting times.”

“The ANZ Global FIG team is well positioned to support its clients – our strong partners – to capitalise on the areas of growth that are considered strategically important.”

There is optimism around the growing charge of innovative investment, Bremmer said, particularly in the sustainability space.

“I’m much more optimistic about what’s happening around climate on the back of these sustainable investments being made in Europe [and] the United States,” he said. 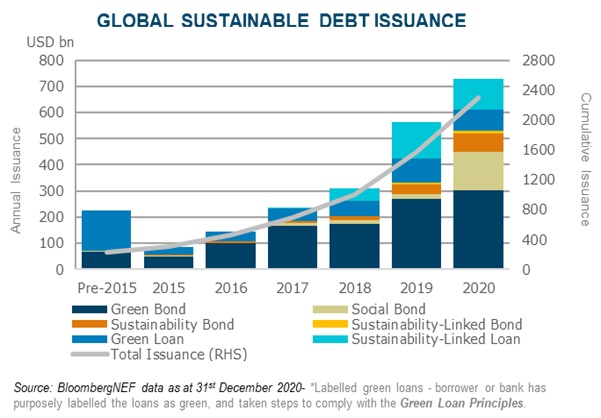 This will be "driven by increased focus from regulators and investors on the impact of climate change, impacts on biodiversity loss and social issues such as diversity and concerns about inequality in education and health care”, she said.

“The transition will continue to be the cornerstone of market development with the proliferation of net zero targets or aspirations by governments, semi governments, large corporations and investors.”

Growing competition around climate between the US and China – a race China leads by some distance, Bremmer said – will help drive further innovation in the sector. All of that means “we have a better shot at” keeping climate change in check, Bremmer said.

Indeed, broad innovation will be the cornerstone of post-COVID opportunity, Bremmer said.

“Where the wealth is, where the jobs are, where the companies are doing well, are the most-innovative parts of the global economy,” he said. “And that means a much better shot at further growth, further efficiency, and effective response to new global challenges of the 21st century.”

Growth will take “an enormous hit as we work our way through COVID-19 and as we vaccinate the world,” Bremmer said. “But my long-term expectation is actually an awful lot more positive.”

“Coronavirus is less of a disaster for investment expectations than otherwise thought.”

US recovery picks up speed