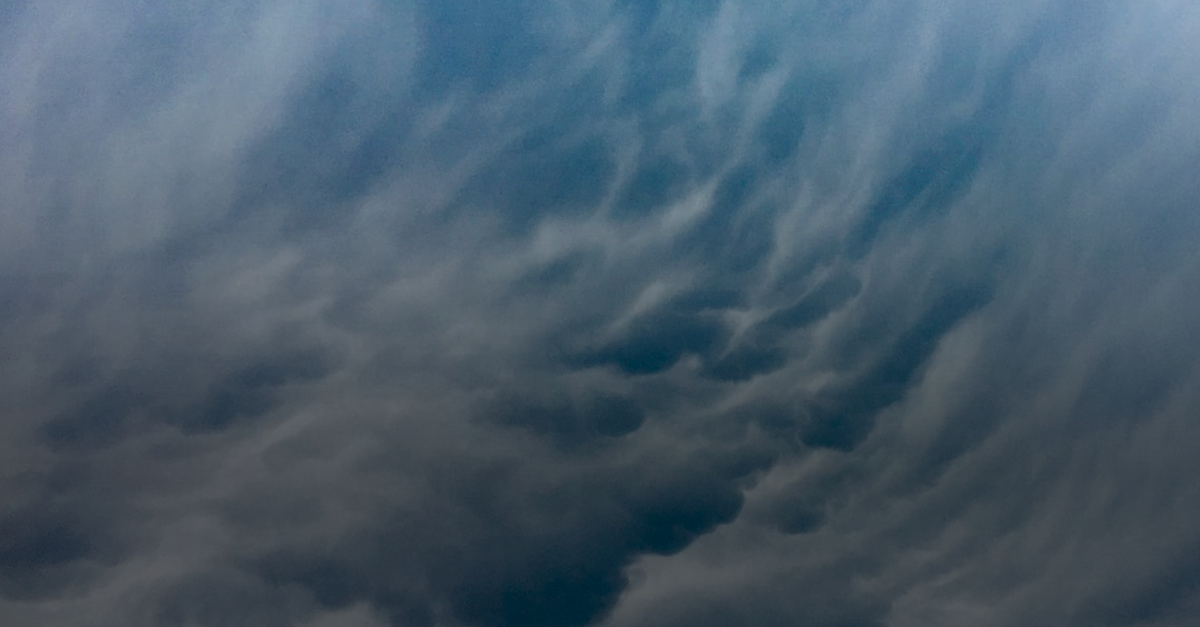 La Niña looks to be on its way and commodity markets face a resulting shake up.

The likely development of a La Niña weather system could have a sizeable impact on short-term demand and supply patterns across a range of commodities.

ANZ Research expects the major impact of La Niña to be on winter space heating and electricity demand, with harsher-than-average weather conditions likely to lead to a spike in broader energy demand, and potentially a corresponding rise in energy prices.

Dry weather in South America and the US can weigh on yield prospects of soybeans and corn harvest, pushing grains prices higher.

In the most simplistic terms, La Niña brings heavy rains in Australasia, Asia, West Africa, and drought in Americas.

It’s essentially the cold phase of the El Niño-Southern Oscillation (ENSO) cycle. While El Niño warms waters in the central Pacific Ocean, La Niña has an opposite effect. It occurs when the Pacific Ocean and the atmosphere above it cools. These changes can trigger large shifts in weather patterns.

In addition to rainfall, in Asia it can result in a shift in temperature extremes, greater tropical cyclone numbers, an earlier monsoon onset and delay in withdrawal.

The likelihood of this weather systems developing has risen significantly in recent months. According to Australia’s Bureau of Meteorology (BOM), all key indicators of the ENSO have now reached or exceed La Niña thresholds.

The BOM also highlighted that all surveyed international climate models indicate this La Niña event persist at least until January 2021.

Such dramatic weather patterns can play havoc with commodity markets. Heavy rain or flooding can impact the extraction and movement of commodities globally. On the flipside, drought in the US and South America can see crop yields fall dramatically. The changes in temperature can also shift patterns in demand, particularly for energy commodities.

The La Niña weather pattern is likely to encourage stronger demand for energy commodities. Colder-than-average temperatures in China are likely to lead to additional consumption. 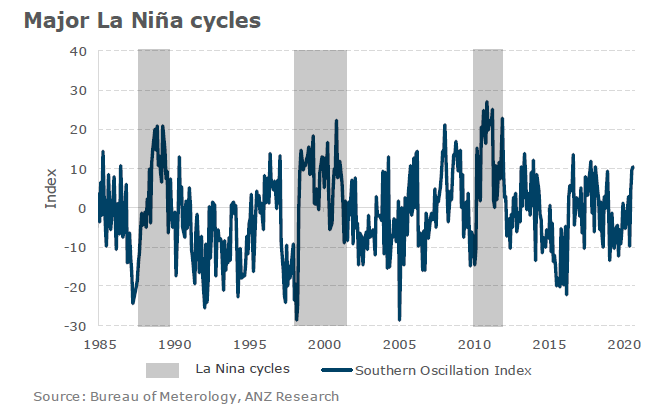 ANZ Research sees risk of supply disruption in key commodities such as coking coal and iron ore. The last major La Niña event resulted in two-thirds of the global seaborne coking coal market being shut down. Increased iron ore disruptions from hurricanes could also be on the cards.

Increased disruptions from hurricanes in the Atlantic can also disrupt the oil industry. Gulf of Mexico offshore oil production accounts for 17 per cent of total US crude oil production. However, this can be mitigated by lower demand from refiners that are also shut.

The six wettest spring-summer periods on record for eastern Australia occurred during La Niña years. Of the 18 La Niña events since 1900, 12 have resulted in floods for some parts of Australia, with the east coast experiencing twice as many severe floods during La Niña years than El Niño years.

Australia was hit particularly hard in 2011 by floods, impacting three-quarters of the state of Queensland and shutting down two-thirds of the global seaborne coking coal market.

The coal markets were further squeezed by heavy rainfall and extended monsoon seasons in coal-producing regions of Indonesia, Colombia, and South Africa. Queensland's last major weather-related event was Cyclone Debbie in April 2017, where spot prices spike massively on disruptions to the Goonyella rail system for around six weeks.

Iron ore ports and mines are regularly shut down during cyclone season in Western Australia. This results in first-quarter exports from Australia traditionally falling from the fourth quarter. In fact over the past decade, the quarter-on-quarter decline has averaged 8 per cent.

In 2011, exports were hit particularly hard, despite the industry recording double digit growth rates in previous years amid a boom in Chinese demand. In 2016, when colder-than-average temperatures were felt across much of northern and eastern China, the sector saw a boost to both power and gas use in space heating. Winter gas demand grew by over 20 per cent year on year as a result.

The average winter temperature in north and northeast China was 1 to 2 degrees Celsius lower than normal during the past five La Niña events since 2000, according to China’s National Climate Centre.

However, the current backdrop for the Chinese LNG market is decidedly different to 2016. Demand has been impacted by the global pandemic. The collapse in coal prices has also seen thermal coal regain some market share.

Chinese importers have overcome some recent challenges, with heavy rain and a typhoon caused unloading delays at various terminals on the country’s east coast. Should this La Niña winter bring lower temperatures then we could see even greater year-on-year growth through the fourth quarter of 2020 in particular.

The potentially stronger demand could be magnified by an acceleration in coal-to-gas switching. Even with consumers in China being moved to natural gas as a source of heating, colder than normal weather should also benefit thermal coal demand.

Northern and eastern China power stations operate their coal-fired plants at higher utilisation levels. This will ultimately result in a boost to demand via restocking of thermal coal inventories.

The La Niña weather system can also have a sizeable impact on oil and gas supply in the US. The Gulf of Mexico area, both onshore and offshore, is one of the most important regions for energy resources and infrastructure.

The official hurricane season for the Atlantic Basin is from June 1 to November 30. Already one major hurricane (Laura) has shut down production.

Because hurricanes are relatively easy to forecast and monitor, oil companies can prepare well in advance. This process has been refined over decades, meaning the impact on infrastructure can be mitigated to some degree.

The issue comes after the hurricanes have passed. The more damaging hurricanes can take time to recover from while the frequency can delay the recovery process even further.

La Niña brings a reprieve to Australia’s parched wheat belt and above-average rainfall in Asia. This will benefit Australian wheat crop and plantation crops like palm oil and cocoa in Asia and Africa, respectively.

While this weather pattern is good for these parts of the world, it causes dry condition in the Americas. Dry weather in these regions can potentially undermine harvest prospects of crops, depending on the intensity of the event.

Signs of dryness have already been prevailing in Brazil and Argentina, raising concerns for soybeans and corn plantings. A lack of soil moisture in Brazil is delaying the sowing, leaving risks of follow-on effects on the second Brazilian corn crop.

Argentina is facing similar dry condition, delaying the ongoing corn and soybeans plantings. US winter wheat crop can be impacted as well and if this dry weather continues until US summer planting season, then yield prospects of corn and soybeans will be curtailed too.

This looming risk of dry weather can push the prices of grains - corn and soybeans - higher, and could tickle down to meat prices via higher feed costs.