Since its emergence late last year, COVID-19 has swept the globe taking an unprecedented toll on world health and business activity. In addition to the staggering human casualties, the economic fallout is feared to lead to the worst recession since the Great Depression.

More than six months into the outbreak, policymakers face a tough choice as they weigh the risks of reopening economies in the face of a pandemic that is not slowing down. Yet, it’s essential to look to the future and plan for a time when a recovery will be underway, and pandemic-era regulatory relaxations and fiscal support measures are eased out.

To understand the implications of such a reopening and what it means for banks operating in the region, ANZ recently organised a webinar titled, “What to expect from the Post-COVID economy in ASEAN,” featuring a panel of experts who shared their insights on the outlook for the ASEAN region from a bank’s perspective. As Mark Harding, ANZ’s Head of Financial Institutions Group for South East Asia, India and Middle East, puts it: “Together with a potential economic recovery we will see many of the central bank support measures and regulatory relaxations eased out in the medium term. Hence it’s an opportune time for banks across the region to take a hard look at the immediate impact as well as plan for the threats and opportunities in the medium to longer term.”

While swift action from governments and central banks around the world has helped prevent the recurrence of a financial crash, major risks remain and the region has to brace itself for a protracted recovery, warned Khoon Goh, Head of Asia Research, ANZ.

Hit by a combination of factors, such as lockdowns and international travel restrictions, and the resultant collapse in consumer confidence and demand, global GDP is set to shrink by 2.9% in 2020, he noted, adding: “Unlike the global financial crisis, a credit crunch will be avoided. A more immediate risk is the possibility that what’s happening now could turn into a solvency crisis.”

TOGETHER WITH A POTENTIAL ECONOMIC RECOVERY WE WILL SEE MANY OF THE CENTRAL BANK SUPPORT MEASURES AND REGULATORY RELAXATIONS EASED OUT IN THE MEDIUM TERM.

Economic impact through the four channels 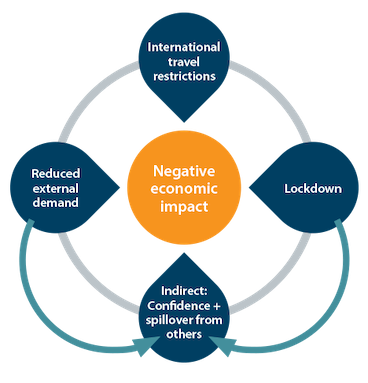 Amid the gloom, Asia has fared relatively well in managing the crisis compared to their Western counterparts, the panel observed. China, the first to be affected, has seen hopeful signs of recovery since March after a drastic decline in economic activity between the end of January and February as the country took shut down to limit the outbreak.

The ASEAN region too has done relatively well in limiting the human cost of the pandemic, and economic activity in the bloc is picking up, Goh noted, even as other countries around the world are debating further lockdowns amid fears of a resurgence of the virus. Further, countries such as Vietnam and Thailand are expected to gain in the long term from the trade conflict between the US and China, and its impact on the global supply chain. “There are opportunities out there. Identifying and acting on it is the difficult part, as most companies are trying to grapple with managing the pandemic,” Goh said.

Looking ahead, an effective virus containment strategy will be the key determinant of the pace and quality of economic recovery, the panel agreed, predicting a slow and uneven road to pre-crisis growth given the varying track records of countries in managing the outbreak. Vietnam, which has been relatively successful in containing the outbreak, has returned to positive growth in the second quarter, and is seen on course to continue attracting FDI inflows, and post a strong recovery. Singapore and Thailand, whose economies rely heavily on trade and tourism, respectively, as well as structural problems such as an ageing population, could be slow to recover in the medium term, the audience heard.

ASEAN growth compared to prior crisis 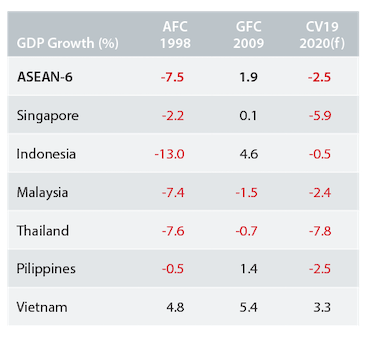 The GDP forecasts are as at 15 July, and are subject to revisions. The GDP forecasts are as at 15 July, and are subject to revisions.

Further, not all sectors are expected to make an equal recovery with the pandemic affecting mobility and spending patterns – changes that could linger for some time. Sectors that depend on in-person interactions are expected to be severely hit, with international travel pegged as the last to recover and not fully, Goh noted, adding that small and midsized businesses could be among the worst hit.

“For the ASEAN-6 economies, I’m expecting the level of GDP to only revert back to pre-crisis trend in 2024 or 2025. I believe it is not a V-shaped recovery but an elongated recovery. It’s still better than what happened after the Asian financial crisis.”

FINALLY, WHILE THE CURRENT COVID19 CRISIS MAY SEEM BAD FOR THE ASEAN-6 ECONOMIES DRIVING A FORECASTED 2.5% CONTRACTION IN GDP IN 2020, THEY HAVE FARED WORSE DURING THE ASIAN FINANCIAL CRISIS WITH AN OVERALL CONTRACTION OF 7.5% IN GDP 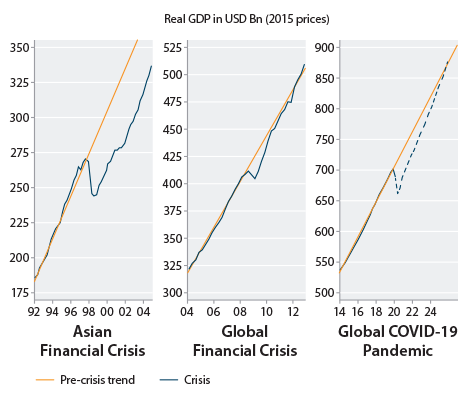 As the pandemic upends entire sectors and businesses are forced to revisit their operating models and investment plans, it will lead to tough credit conditions across the ASEAN region and, in turn, impact banks’ asset quality, the audience heard.

Eugene Tarzimanov, Vice President, Moody’s Investors Service, expects that ASEAN banks will see a jump in problem loans accompanied by weakening profitability. While government support, such as liquidity injections and a relaxation of rules will alleviate some of the pressure on banks, it will not fully offset it, he warned.

As asset quality deteriorates it will escalate banks’ credit costs even as shrinking margins hurt interest income, Tarzimanov pointed out, adding that as loan payment moratoriums are lifted or relaxed, 2021 will see a surge in recognition of problem borrowers. 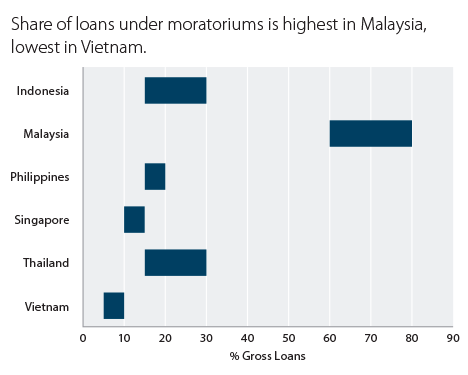 Note: Share of loans under moratorium is our estimate. * Moratoriums are automatic for small SME loans in Thailand, and for all retail loans excluding cards in Malaysia.
** Relaxation of capital norms is mostly via easing of rules on risk weighted assets.
Note: Soft loans = loans granted with below-market interest rates. 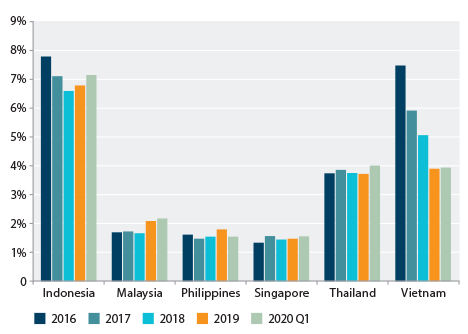 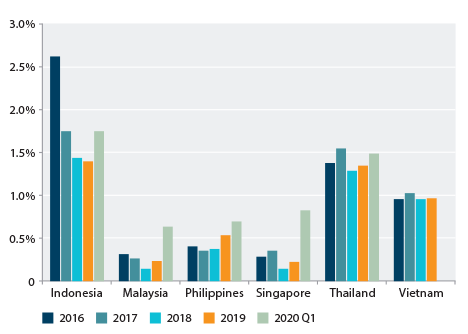 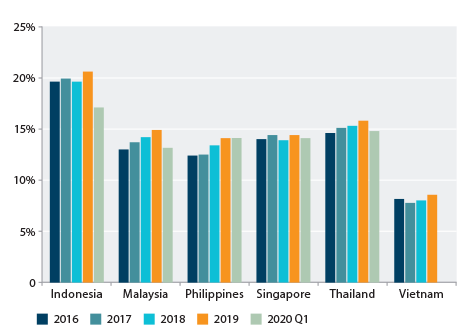 According to Tarzimanov, 23% of ASEAN banks now hold a negative outlook compared to 19% in 2019. However, he noted, a majority of bank ratings are well positioned for now and there were no bank downgrades in ASEAN in H1 2020. The region’s banks mostly have investment-grade ratings, with Singapore and Malaysia home to the banks with the highest ratings, he added.

The region’s banks are also well placed in terms of reported capital, funding and liquidity, Tarzimanov said, noting that the decision of regulators in Thailand and Vietnam to restrict bank dividends would be a credit-positive for banks. Further, he observed, the region’s largest banks, thanks to their safe-haven status, are expected to continue to benefit from the inflow of deposits, which can be used to fully fund new loans as is the practice among banks in all covered systems.

“While a majority of banks are adequately capitalised and liquid, and we expect this to continue in 2020-2021, downgrades are more likely for banks that suffer material capital erosion and lack capabilities to rebuild their capital,” he said. “The outlook is obviously negative but it doesn’t mean that a lot of credit ratings will be under pressure.”

There are other positive signs that a nascent recovery is in the making for ASEAN banks. For instance, debt issuance spreads, which had spiked earlier in the year and turned banks away from the market, have narrowed considerably since then, leading to a pick-up in issuances by ASEAN Sovereigns and banks, noted Alfonso Luis Maputol, Head of South & Southeast Asia Debt Capital Markets, ANZ.

“That’s an early indicator that a majority of ASEAN banks do see the region coming out much stronger post-COVID-19 and have started to buffer liquidity amid an expectation of credit growth,” he said. 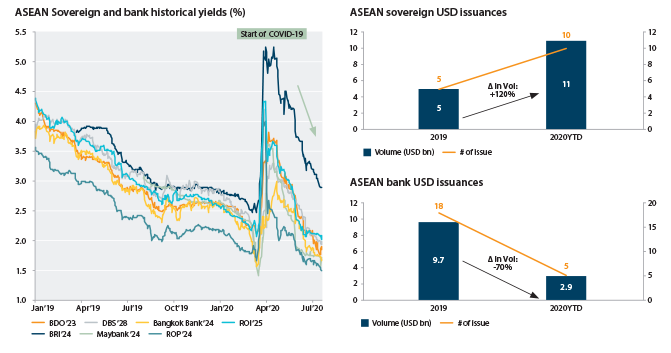 Select ASEAN and APAC bank Tier 2 and AT1 spread benchmarks

Echoing this view, Robert Tsang, Director, Client Insights and Solutions FIG, ANZ, noted the prudence of assessing capital needs based on suitable growth and stress scenarios for the next few years, and if any needs arise, consider pre-emptively tapping capital markets from a position of strength in order to prepare for the difficult road to recovery.

In conclusion, the panel expressed hope and optimism that the region’s banks would recognise the need and act to strengthen their balance sheets in time so they are well equipped to face the challenges expected to arise when governments eventually roll back the policies and measures currently helping the world cope with this pandemic. 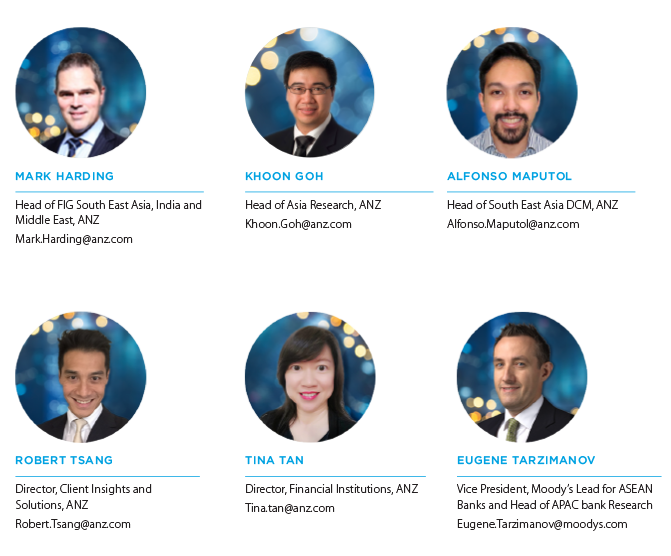