ANZ FIG CONVERSATIONS THAT MATTER - LIFE AFTER LIBOR BEYOND 2021

NAVIGATING THE COMPLEXITIES OF REPLACING THE LIBOR BENCHMARK 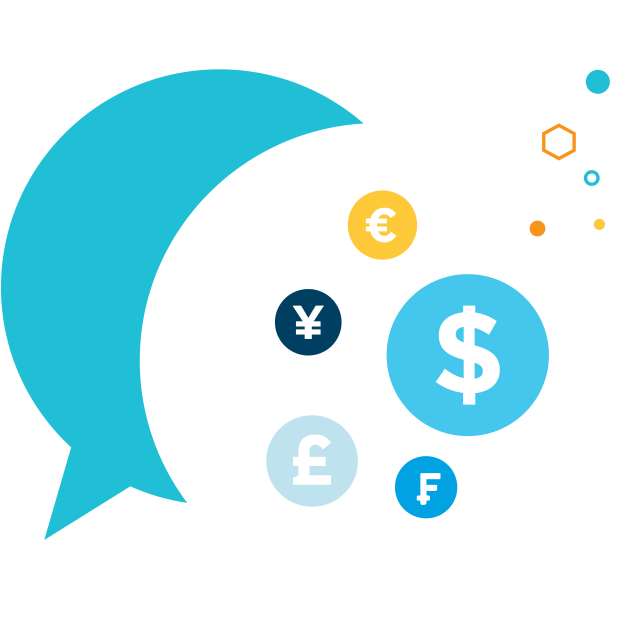 IT APPEARS THE IMMINENT DEMISE OF THE LONDON INTERBANK OFFERED RATE, COMMONLY KNOWN AS LIBOR, IS PUSHING FINANCIAL MARKET PARTICIPANTS AND CORPORATE EXECUTIVES INTO TWO DISTINCT CAMPS: THOSE OPTING TO PLAN-AND-LEAD THE DISRUPTION AND THOSE TAKING A WAIT-AND-SEE APPROACH.

Shifting away from the lending benchmark is unquestionably a massive task – LIBOR underpins more than USD400 trillion worth of contracts for loans, bonds, derivatives, among other instruments.1 Finding another suitable rate and then rewriting thousands of existing contracts will require major restructuring and legal assistance. Moreover, the fallout from this switch is likely to extend well beyond day-to-day operations and could impact business strategies, due to accounting treatments, reporting valuation methods, and Fund Transfer Pricing impacts.

In order to limit the uncertainties, risks and related costs, it is vital to proactively plan for an orderly transition and constantly question the processes in motion. What scenarios need to be considered after the 2021 deadline passes? Can tangible steps be taken early on to minimise vulnerabilities? And how do the alternative rates stack up, especially as repo volatility is impacting one of the major new rates, the SOFR? Those were some of the issues that our guest speakers and audience members delved into at our latest “Conversations That Matter” event - held in Hong Kong and Singapore - on preparing for the end of what is often called “the most important number in the world”.2

LIBOR, a measure of the borrowing costs between banks for unsecured short-term loans, has formed the foundation of millions of financial contracts worldwide for decades now. But despite the rate’s ubiquity, doubts had surfaced in recent years about its integrity and value.

A 2014 study by the Financial Stability Board (FSB), which reviewed the reliability and robustness of interbank benchmarks, recommended the development of alternative nearly risk-free rates (RFRs) and proposed ways for financial markets to adopt them instead.3

Meanwhile, efforts by the UK’s regulatory body, the Financial Conduct Authority (FCA), to reform LIBOR led to the conclusion that the benchmark was potentially “unsustainable” and “undesirable” in the long run. In 2017, the FCA said it would not compel banks to submit their LIBOR quotes after December 2021, effectively giving it an expiration date.4

Those announcements spurred regulators in several jurisdictions, including the US, Switzerland and Japan, to advance their own domestic RFRs to gradually replace LIBOR. However, the sheer scale of the undertaking at hand, given LIBOR’s pervasiveness in the fabric of global markets, is proving to be daunting and difficult.

As Matthieu Sachot, a director at management consultancy Chappuis Halder & Co., told our Hong Kong audience, the volume of assets in the firing line is significant.

“You have to consider your loans, your debt securities, your equity securities. You have to account for your liabilities and then account for the indirect impact to your P&L, for example,” he said, adding off-balance sheet items such as credit facilities, swaps, futures, options and collateral to the list.

Regarding contracts, there are concerns that legacy covenants do not sufficiently deal with the prospect of changes in the underlying benchmark, and that the interim provisions would need to be addressed urgently in a post- LIBOR era.

For instance, all floating rate instruments would suddenly turn into fixed rate ones from January 2022 because the rate would remain stuck at last LIBOR quote calculated on 31 December 2021.

Estimated USD LIBOR based contracts and share maturing by end 2021 Notes: Data are gross notional exposures as of year-end 2016. Estimated maturities based on historical pre-payment rates. The percentages in the chart may not add up to exactly 100% due to rounding off. 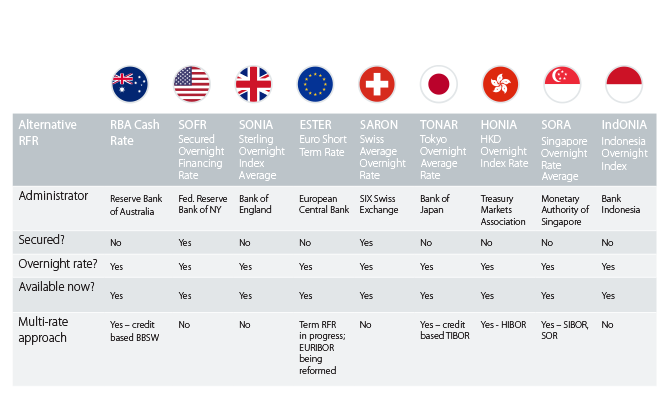 As regulators call ‘last orders’ on LIBOR,5 they have each selected their successor to the benchmark. Sterling Overnight Index Average (SONIA) is the Bank of England’s pick, while the US Federal Reserve has chosen the Repo-based Secured Overnight Financing Rate (SOFR).

But for market participants and stakeholders, the substitution is far from simple due to the fundamental differences in the characteristics of the rates. Most notably, SONIA and SOFR are overnight rates based on actual transaction data, therefore incorporating them requires substantial credit and term adjustments.

“Right now, if you’re looking at replacing LIBOR, and most of the banks are in this boat, you’re going to have to make do with something that doesn’t address what LIBOR was able to achieve, for all its faults,” explained Handa. “At this point, we don’t have anything with a term or credit component to it, so something as simple as a cross-currency swap is going to be very complicated.” 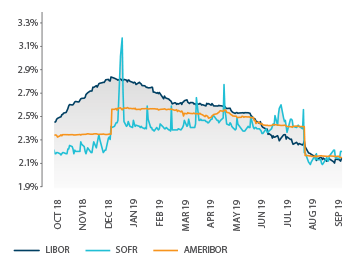 Although the New York Fed argues that SOFR is much more resilient and transparent than LIBOR,6 many lenders and borrowers say they will not migrate to it until a robust forward-looking version is brought to the table. Consequently, the relatively low levels of SOFR-linked issuance means not enough liquidity has been developed in the market and, according to our expert panellists, this is problematic given the status of the US dollar as the world’s reserve currency. 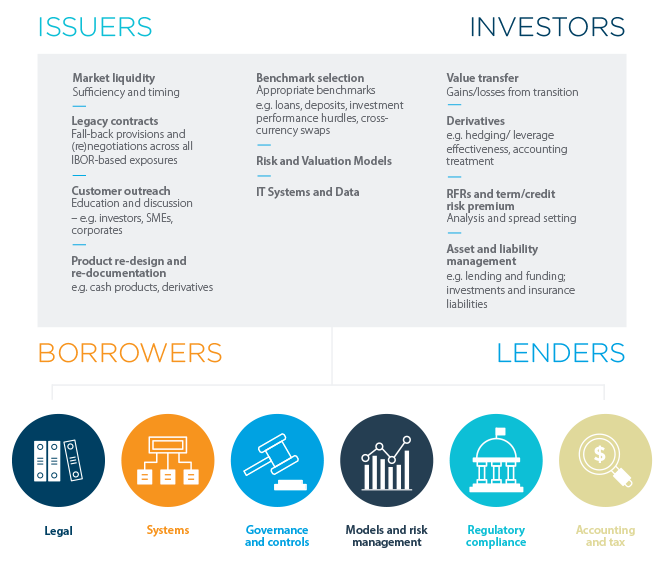 ESTABLISHING A ROADMAP FOR CHANGE

The lack of clarity on LIBOR alternatives is certainly clouding the horizon for the financial services industry and their customers. As a result, several firms and banks are continuing to issue LIBOR-based contracts in the hopes that the deadline will be flexible - or even disappear.

Indeed, the voluntary aspect of the transition has created a grey area where the market approach is leaning towards wait-and-see. “If an authority comes out and says we’re going to stop LIBOR on this date, I think that would be the watershed moment for everybody because we’re dancing around this topic,” said Handa.

Nevertheless, our event speakers shared the view that the discontinuation of LIBOR was an eventual probability, so it is imperative to formulate a roadmap and avoid being caught off guard. Their checklist includes examining exposure to LIBOR and non-LIBOR products, preparing transition and contingency plans, updating risk and operational systems, and weighing up a combination of RFRs.

As the transition timeline gets closer, many work-streams under various regulatory bodies, trade associations, and service providers will be picking up speed and it is imperative for market participants to fine-tune their transition plans accordingly and keep engaging relevant stakeholders. ANZ organized conferences on this topic in Australia and Asia to share key learnings and recommends that companies consider taking a pro-active approach in terms of engaging your clients and counterparts, and take the lead in planning and developing solutions to ensure you manage the potential outcomes that could affect you in a post LIBOR world.