History can teach us a lot about the impact of an election on Thailand’s growth.

Thailand will go to the polls for the first time since 2014 on March 24.

The upcoming election will be the first under the new constitution and will see 350 candidates directly elected to the Thai House of Representatives through single-seat constituencies and 150 elected through proportional representation from party lists.

Historically the Thai election process appears to have had a greater influence over equity prices in Thailand rather than currency, at least over the past two decades.

Thai elections have not had a significant bearing on growth in the past. Public spending (government consumption plus public investment) picked up ahead of the 2005 and 2007 elections but not others.

There are also no clear trends in either private consumption or investment growth during the election seasons. Instead, it is periods of political unrest that have had a more discernible impact on growth. “Thai elections have not had a significant bearing on growth in the past.

Recent opinion polls suggest no single party will win a clear majority and a coalition government looks to be the most-likely outcome. But opinion polls have misjudged election outcomes before. 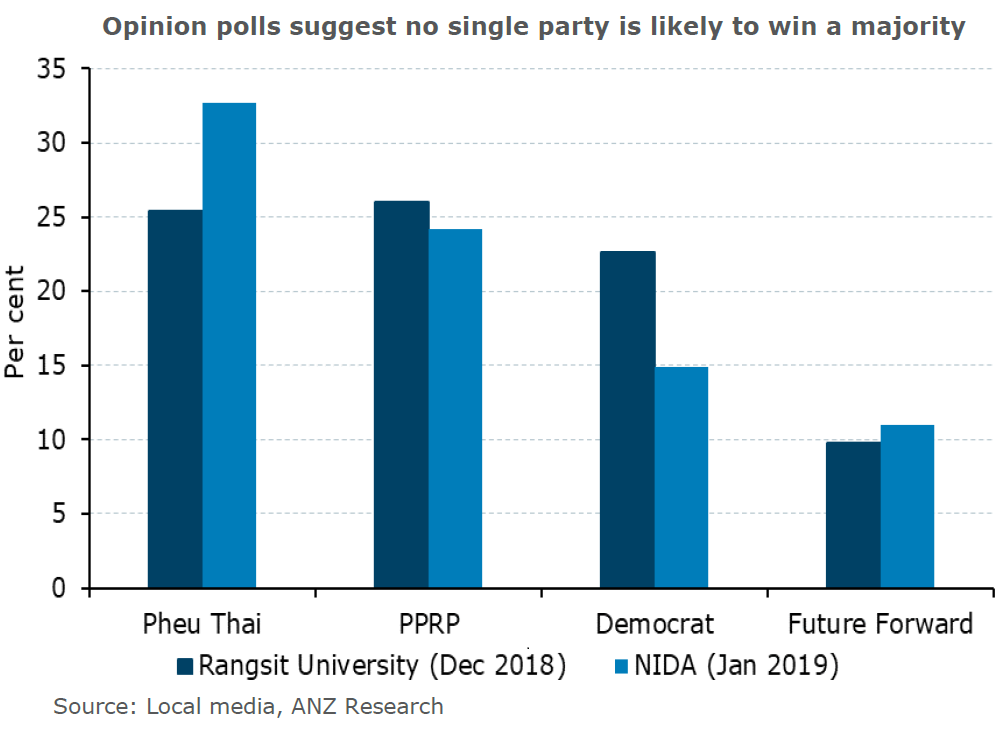 The benchmark SET (Stock Exchange of Thailand) index recorded losses in the two months prior to the vote in all the elections since 2006, which marked the start of the most recent manifestation of Thai political instability.

After elections the SET tends to reverse some of these losses, at least in the initial days after the vote, possibly reflecting relief that the election was completed.

While the rally in the SET was short-lived following the 2007 election it’s worth that global factors were in play and the SET had outperformed the MSCI Asia (excl Japan) index for a couple of months after the vote.

Meanwhile the performance of the Thai baht in the lead-up to - as well as the immediate aftermath of - past elections was mixed. That said, the THB has historically strengthened against the US dollar in the first month after an election, with 2005 the main exception.

It’s worth noting the THB outperformed other Asian currencies during the 2005-06, 2008 and 2010 periods of political unrest, so other factors - including Thailand’s external position - may be a bigger driver for the THB when compared to domestic politics.

Krystal Tan is an economist at ANZ

Looking for Opportunity in a Geopolitical Recession

We have entered a new world order where the U.S. is no longer the global leader – and that has ramifications for not just economies, geopolitics and security but even the shape of the internet, according to Ian Bremmer, one of the world’s most highly regarded political scientists.

Australian corporates are increasingly tapping Australia’s superannuation funds and institutional investors for longer-dated loans and to diversify their funding sources away from the bank market, paving the way for a slow evolution of a direct lending market.