Winds of change (and growth) blow in NZ

The indirect impact of the global backdrop – anxiety over the outlook – may for now be bigger than the direct one in NZ.

Economic tailwinds in New Zealand – including easier monetary conditions – will start to outweigh the headwinds in the second half of 2019, ANZ Research forecasts. This will see growth gradually lift - but not fast enough for the Reserve Bank of New Zealand.

With capacity pressures waning before domestic inflation is where it needs to be, ANZ Research sees two further official cash rate (OCR) cuts this year.

The global backdrop against which the NZ economy operates has become increasingly clouded in 2019. Yet the direct impacts of slower global growth on the economy have so far been muted.

Commodity prices and tourist numbers are down a little but this has been offset somewhat by weakness in the NZ dollar.

The indirect impact of the global backdrop – anxiety over the outlook dampening investment and employment – may be more significant but is impossible to quantify.

Business activity and sentiment measures have been subdued for some time and the growth slowdown is evidence that this has influenced decision making.

“[Tailwinds] – including easier monetary conditions – will start to outweigh the headwinds in the second half of 2019.”

NZ’s commodity prices have been remarkably resilient to the slowdown in global growth - and China’s growth in particular. Many of New Zealand’s food exports are luxuries in China, commanding premium prices, but with the downside of more sensitive demand.

The cycles in New Zealand’s commodity prices (in world terms) are related to the cycles in car sales in China, for example. A bag of gold kiwifruit and a new car are hardly substitutes, but they are both discretionary spending.

In that context, over the last couple of years - but particularly over 2019 – NZ’s commodity prices have been remarkably resilient to cycles in Chinese consumer moods.

Three things to watch in the second half of 2019

Building consents: New Zealand needs a lot more houses but that doesn’t mean it will get them.

Inflation expectations:  some measures have started to slide slightly, which, if they continue, will worry the RBNZ. 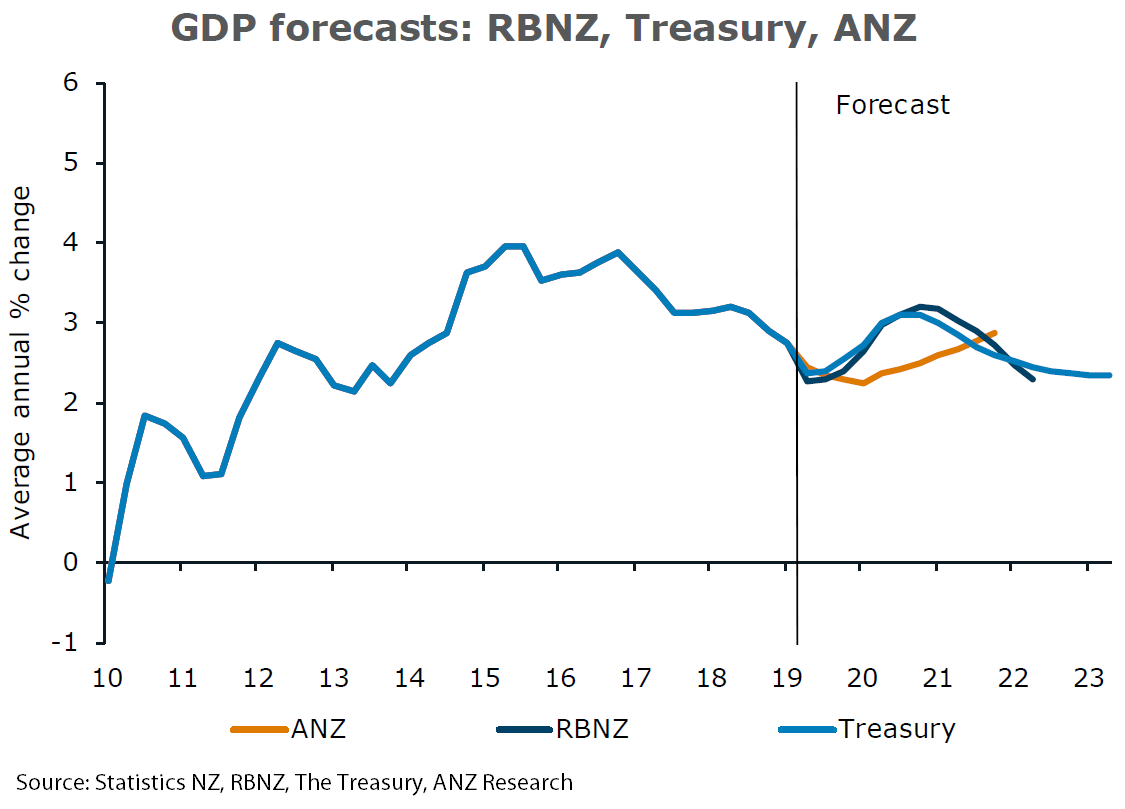 However, the RBNZ (and the Treasury for that matter) are more optimistic about the speed of the recovery in growth in the second half of the year. In the OCR Review in late June the RBNZ admitted that the risks had become 'tilted to the downside' around these forecasts, suggesting we can expect to see a downward revision in the next published forecasts in August.

The headwinds ANZ Research sees weighing on growth are:

• Business sentiment: justified or not, firms seem pessimistic about the outlook. To the extent this is affecting investment and employment intentions it can become self-fulfilling – for a time at least.

• Population growth: unfortunately net migration data is now prone to very large revisions under the new methodology but ANZ Research’s best guess is population growth will keep declining. That is significant in an economy where per capita growth is less than 1 per cent a year.

• A lack of productivity growth: for reasons not entirely clear, firms over this business cycle have chosen a more labour-heavy mix when growing their businesses, rather than investing.

Whether strong net migration is the cause or effect is unclear but official productivity data broadly tracks this mix of inputs. Unless business investment picks up sharply (and the level of surveyed intentions certainly gives no signals it will) growth will decline along with population growth.

• A ‘cooler’ housing market. A range of policy changes have been introduced or are proposed, aimed at both reducing the attractiveness of housing investment and improving the lot of renters.

The result is housing – particularly in Auckland – is underperforming relative to where record-low mortgage rates and population growth would suggest. ANZ Research expects this theme to continue.

Consumer confidence is still high and consumers are saying they think it’s a good time to buy a major household item but retailers are nonetheless having a tough time.

There are of course tailwinds for the economy as well. Fiscal stimulus is a positive, albeit a relatively short-lived one on current forecasts.

The labour market is tight. Despite low sentiment and markedly weaker employment intentions, firms continue to report finding labour as their largest problem. This falls into the ‘nice-to-have’ problem bucket.

All up, the economy is alright but a little sluggish. The issue for the RBNZ is muddling through is not going to cut it in terms of achieving the 2 per cent inflation target sustainably when core domestic inflation is still well short of where it needs to be. It is running a bit over 2 per cent in annual terms whereas the RBNZ needs it to run around 3 per cent, to counter the drag from tradable inflation that tends to run at around 1 per cent.

The May OCR cut was sold as a proactive strike that should negate the need for further action. Since then local data has evolved much as expected, on balance.

However, as we head into the second half of the year ANZ Rersearch believes it will become evident the RBNZ’s forecast strong growth bounceback will not eventuate. And the central bank is coming round to our point of view:  the OCR Review last week acknowledged that a further cut to the OCR was 'likely'.

ANZ Research is forecasting another two rate cuts this year, taking the OCR to just 1.0 per cent. With inflation still lower than it needs to be and downside risks accumulating, the tolerance on the part of the RBNZ for any downside surprises on either growth or inflation will be extremely limited.

Australia’s options in the trade war

Continued US-China tensions could be a double whammy for Australia’s GDP – and put a dent in hopes for a return to surplus.

The time for talk on the trade gap is almost over. Here are five ways business can help move the needle on a solution.