The outbreak of the coronavirus in China continues to disrupt production chains and increase supply shocks in the country’s economy. Restrictions on public mobility combined with shortages of necessities are impacting regular economic activity.

As a result, ANZ Research has further cut its estimate for growth in China’s 2020 gross domestic product. China’s first quarter GDP growth is now likely slow to between 3.2 per cent and 4.0 per cent.

Such an exceptionally soft Q1 result would drive total 2020 GDP growth to 5.5 per cent, implying an average growth of 6.0 per cent between the second and fourth quarters.

The impact of the outbreak now looks likely to last longer than previously thought, leading to a reassessment of ANZ Research’s previous projections of 5.0 per cent GDP growth in Q1.

From an economic point of view, the virus outbreak is an external shock rather than a structural issue. The impact should be one-off.

“The virus outbreak is an external shock rather than a structural issue [and] the impact should be a one-off.”

The novel coronavirus (COVID-19) outbreak has spread to 28 countries and territories, infected over 50,000 people and claimed over 1,000 lives at time of writing.

The People’s Bank of China (PBoC) has injected a significant amount of liquidity into the economy through reverse repurchase agreements. The Ministry of Finance has also launched a refinancing scheme to support loans related to antivirus activity and subsidised 50 per cent of interest rate payments, with a cap on the loan rate at 1.6 per cent.

Thanks to the government’s supportive measures, ANZ Research expects an economic rebound as the situation stabilises. But gauging the timing of this rebound remains difficult.

If Q1 GDP growth can attain 3.6 per cent as the mid-point of the ANZ Research forecast, the economy will still need to achieve average growth of 6.4 per cent from Q2 to Q4 in order to hit 5.8 per cent for full-year growth. This is difficult but not entirely impossible.

In 2003, China witnessed a post-SARS economic recovery in the second half of the year. However, the economy was in expansion mode in the early 2000s and the global environment was favourable to an export-oriented economy. Now China’s growth momentum is on a declining trend. Any rebound is unlikely to be spectacular.

To contain the spread of the virus, Chinese authorities have imposed a strong mandate restricting the mobility of people. Some neighbourhoods are using QR codes to track the movements of residents to avoid physical contact

Although the Ministry of Education has not made any official announcements it is speculated that schools will remain closed throughout February. 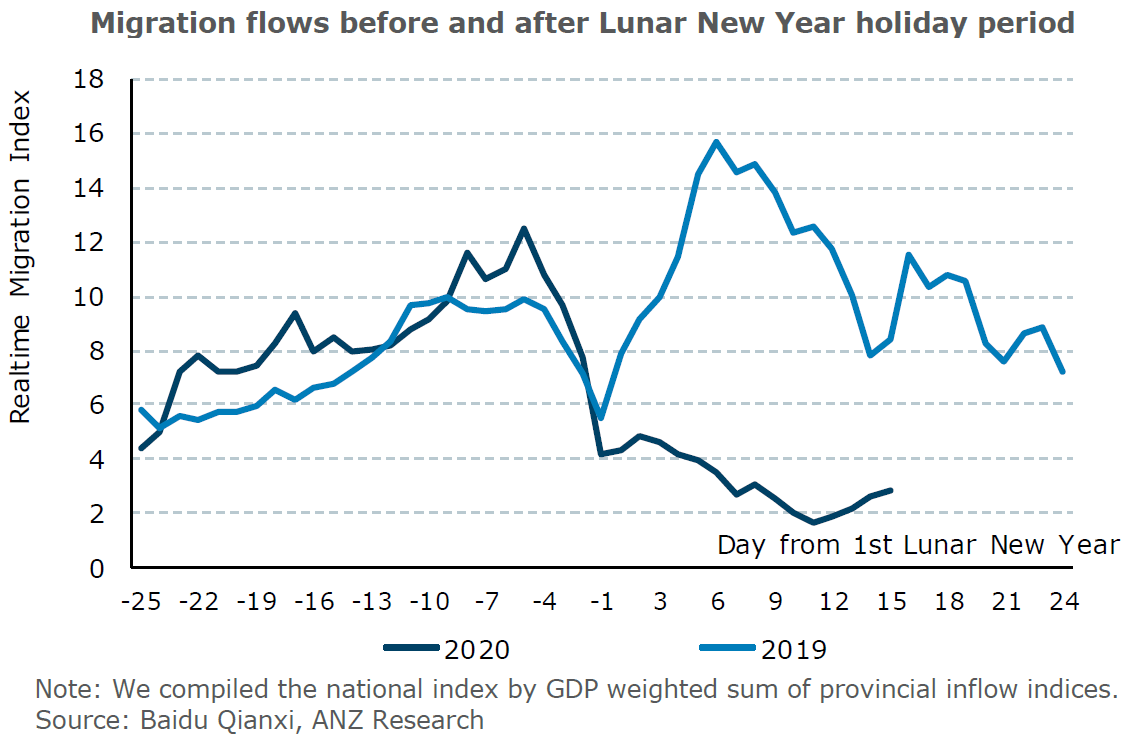 Wuhan has implemented a ‘closed door policy’ since January 23, while many other cities have also put in place restrictions on travel, such as setting up quarantine checks on roads or reducing public transport services.

Although the Chinese government previously told businesses to resume work on February 10, traffic flows across the country remain limited. 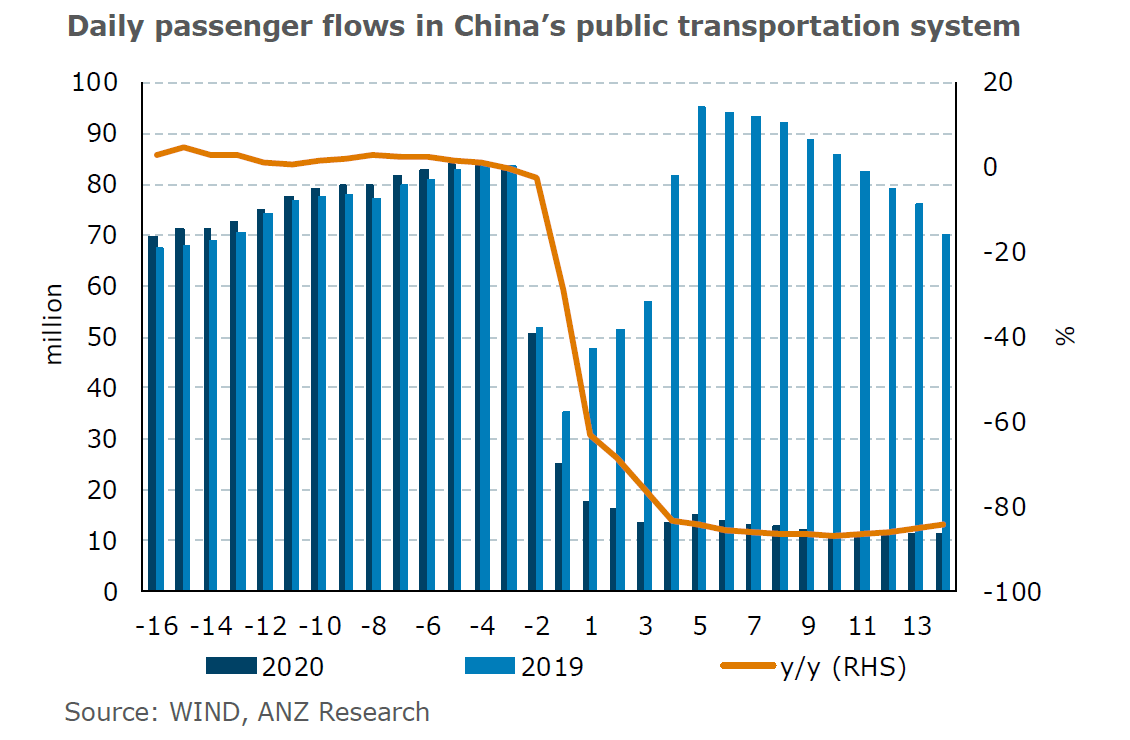 The unexpectedly severe virus outbreak has put the brakes on the slight improvement in economic activity in China following the signing of the US-China trade agreement in January.

China’s industrial production had rebounded to 6.9 per cent in December 2019 from a historic low of 4.4 per cent in August. Exports also registered a decent growth of 7.9 per cent in January after five consecutive months of contraction. However, the virus outbreak will have negative impact on both demand and supply.

On the demand side, economic activity involving human interactions has been halted. These include tourism, catering and onsite services, and property transactions. In supply, logistic activities are constrained by the interruption of transport services.

Migrant workers are key economic inputs to China’s urban economy. The migration data collected by Baidu’s map tool has a positive correlation with provincial GDP growth. In addition to blue-collar workers, many professional and skilled workers also remain trapped in their home towns. The employees of most multinationals have been asked to work from home, according to anecdotal reports.

ANZ Research’s previous estimate on the impact of the virus was based on the assumption factories can resume production on February 10. That no longer holds true.

As a result, ANZ Research has recalibrated and looked to provide a range of GDP estimates in various scenarios. China’s National Bureau of Statistics compiles its GDP data using the production approach, so GDP has been forecast in different industries based on different rationales.

In the primary sector, using the 2002-03 SARS epidemic as precedence, the impact of the novel coronavirus outbreak on agriculture or the like should be minimal.

While there is a decline in tourism-related retail sales, increases in ecommerce and household spending on healthcare could partially offset any losses. 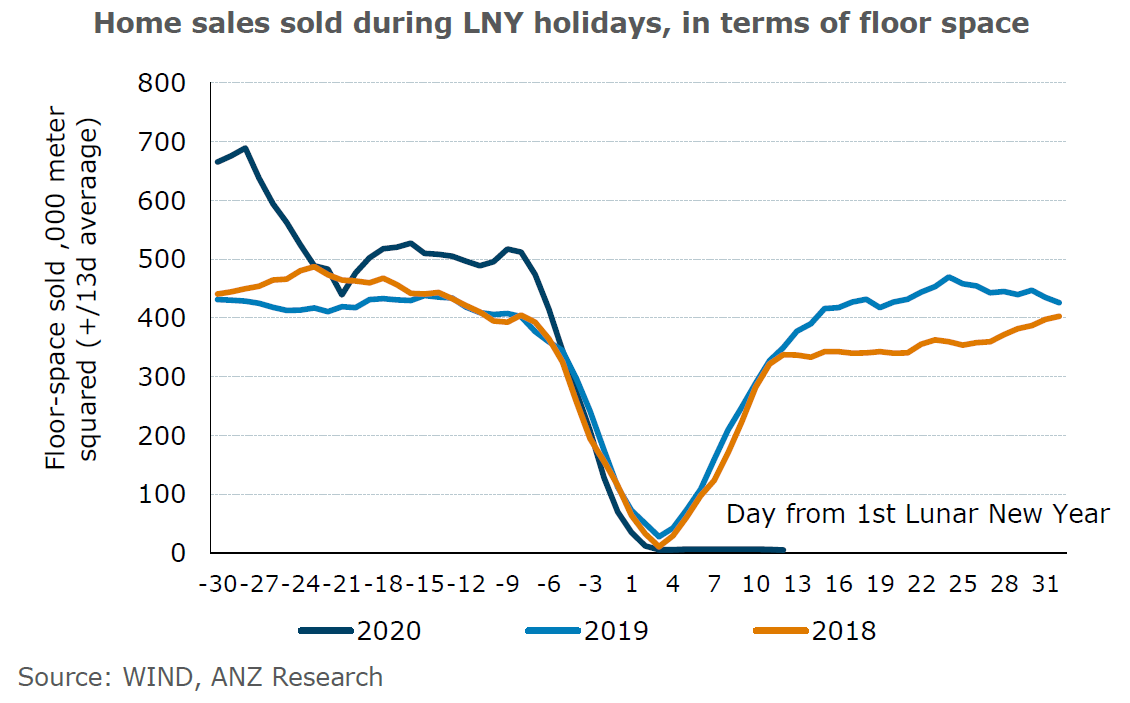 For other services segments, the precedent of SARS can again be used as reference point. Since the magnitude of the COVID-19 and the travel restrictions (including the stay-at-home policy) are larger than previously, the impact has been scaled up.

In our model, the GDP of secondary industry is invariant to service sector impact. China’s industrial GDP growth will decline to 4.4 per cent (5.7 per cent in 2019) if production is resumed on March 1 but drop to 3.8 per cent delayed to March 31.

For the services sector, growth will likely slide to 4.1 per cent if work resumes on March 1 but slow to 3.6 per cent if it is postponed to March 31.

The COVID-19 will hit the services industry more severely as this sector registered strong growth of 6.9 per cent in 2019.

This story is an edited version of an ANZ Research note. Click here for the full report.

Limited impact of coronavirus in Pacific