Ongoing support from central banks will ensure the rise of regulator-backed digital currencies won’t dull demand for gold - at least in the immediate term, according to Daniel Hynes, Senior Commodities Economist at ANZ.

Recent expert commentary in the space has suggested a shift to the use of digital currencies by central banks – including China’s own Digital Currency Electronic Payment – could lesson demand for gold as a reserve, impacting the broader market.

Speaking at ANZ’s annual gold dinner from Perth in November, Hynes said that while the situation would likely evolve in the long term, re-energised activity from central banks as the post-COVID recovery kicks into gear would ensure immediate demand.

“It does present a long-term issue for gold as a reserve base, and we'll have to watch that closely,” Hynes told the event. “But I think for the moment, the huge level of backing [for] this physical commodity will hold it in good stead as a reserve base.”

“Certainly China has indicated they're looking to [pursue a digital-currency strategy]. But that might be more around removing themselves from their link with the US dollar, and to be leaders in the in the FX market.”

Hynes made the comments at the event in a conversation with Nick Frappell, Global General Manager at ABC Bullion, and Luke Collins, Head of Commodity Sales, Australia at ANZ. You can listen to an edited version of the conversation on podcast below.

Central bank gold buying is expected to fall for the first time in years in 2020, after near-record periods of purchasing in both 2018 and 2019. Many forecast that demand to return in calendar 2021 as the recovery gains momentum.

Hynes said part of this move was a realisation from central banks they needed to diversify their reserve bases, particularly given COVID-driven volatility on markets, but a return to gold was likely in the New Year.

“The idea this rally is going to start to peter out won't be a significant headwind for central banks,” he said. “I suspect they'll continue to add to those [gold] reserves over the coming years.”

Frappell said while he was ultimately confident in the outlook for gold, an upset in bonds through 2021 could potentially weigh on broader markets.

“If there was a… sudden reset in fixed income markets, for example… that might actually cause a revaluation across other asset classes, including gold,” he said. “Especially since gold is so intimately linked to yield.” 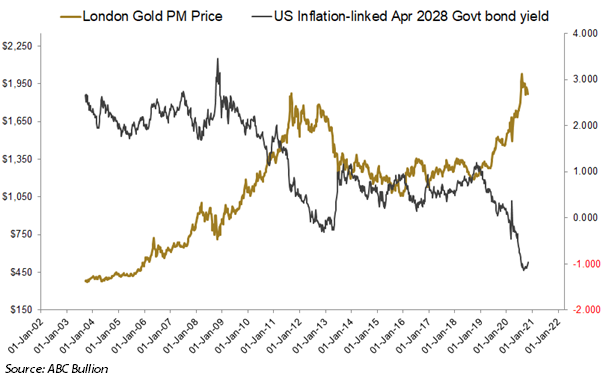 “I'm not saying [a correction] will happen, but bonds have been the tremendous bull phase for a long time,” he said. “There could be a scope for an upset there.”

“Overall, I'm bullish. There are plenty of reasons to be bullish.”

Hynes said ANZ’s modelling indicated gold was well-placed, based on the performance of a host of other markets.

“Certainly on our forecasts for [the US] dollar, inflation and bond yields, it looks like gold still has plenty of upside,” he said.