ANZ Research expects direct fiscal stimulus worth around $A180 billion over the four-year forecast horizon to be part of the collective policy plans in Australia’s upcoming round of federal, state and territory budgets for 2020-21.

The key focus will be jobs growth, with governments willing to spend until they are confident of reaching jobs recovery targets. Some ‘bridge-building’ funding to low and middle income earners in the short term, designed to soften the impact of Victoria’s shutdowns and the fiscal cliff, seems likely in the December and possibly March quarters.

Governments are ready to move to growth enhancing, having now largely completed income-protecting measures. That means the Commonwealth will enhance business incentives, add to infrastructure spending (probably through state grants) and may inject equity into government business enterprises. There will also be reforms aimed at promoting productivity growth.

State spending will be a mix of income support, tax relief and stimulus for specific projects. Governments will keep responding to conditions as they evolve, so ANZ Research will continue to recast its fiscal outlook, particularly around labour market developments. Australia’s economic outlook is weak and subject to pandemic-related exogenous factors. The sources of production have excess capacity, and international and state borders are closed indefinitely.

With the Reserve Bank of Australia’s policy options running low, discretionary fiscal policy is necessary to raise aggregate demand and boost employment. Further monetary expansion is likely, but we think its impact will be modest.

RBA Governor Philip Lowe noted on September 1 the expansion of both fiscal and monetary policy would be necessary.

Treasury Secretary Steven Kennedy said on July 30 there would be three phases of fiscal support. The first would be to provide income support to people and businesses. The second would see income support maintained but increasingly targeted, while switching fiscal support to encouraging economic activity and employment. This second stage would also involve taking the opportunity to reform where it arises.

Kennedy said the third phase would “increasingly focus on the functioning of labour and product markets, and responding to accelerated structural change. Clearly, support for demand will still be required to lock in a declining unemployment rate”.

Fiscal policy’s power lies in its ability to create demand, with the only constraint being the political will to take on debt and potentially a credit rating downgrade.

Australia’s federal and state governments have ready access to capital markets and can borrow at historically low interest rates. The Reserve Bank is also willing to buy government bonds in the secondary market to keep rates low. It has already bought around $A61 billion of bonds since announcing the policy.

Without more fiscal stimulus, unemployment would rise to – and possibly remain at – an unacceptably high level, with damaging long-term consequences. Initial hopes that the economy would need only six months of intensive fiscal care were in hindsight short-sighted.

So far the federal government’s fiscal stimulus has been focused on Kennedy’s stage one and two. The Commonwealth has planned almost $A200 billion of spending and revenue forgiveness over a short period but its forecasts (even before Victoria’s second wave) were for a 2.5 per cent contraction in GDP growth (in 2020-21) and rising unemployment (to 8.75 per cent in the June quarter 2021).

Similarly, where the states have updated their formal forecasts, the outlooks remain poor, especially in Victoria. This is why the third phase is necessary.

Where to from here?

The October 6 2020-21 federal budget is an opportunity for updated economic forecasts and consolidation of policy announcements. Although there will be bigger deficits and more debt, these are unlikely to drive the opposition’s response to the budget.

That is more likely to be concerned with the type of spending aand reforms. While the budget will contain new policy, ANZ Research does not expect it to be a neat 12-month policy package that is forgotten about until the next fiscal update.

The government is more likely to respond to economic conditions as they evolve and be nimble in its policy response. Instead of a set level of spending, its focus is likely to be jobs growth.

In the budget, the government will cast its plan forward four years. In ANZ Research’s view, policy in the 2020-21 federal budget is likely to include:

• an extension of the coronavirus supplement for the JobSeeker to the March quarter;

• household support in the form of cash stimulus to limit the risk of a negative GDP outcome in the December quarter;

• publicly funded infrastructure, including capital grants to states and territories;

• regulatory changes such as acceleration of development processes; and

Making estimates on the size of expenditure is difficult given the pandemic, but ANZ Research thinks fiscal stimulus is likely to be substantial and targeted at a jobs recovery. The estimates are based on policies announced to date and our assumptions of further spending and receipt forgiveness yet to be announced.

ANZ Research assumes around $A80 billion in additional recurrent fiscal stimulus from the Commonwealth over four years. That takes government payments to a historically high 35 per cent of GDP in 2020-21, the year when government outlays are likely to be biggest.

Government payments will then fall in 2021-22 as stages one and two of the policy response shift into the less-urgent and less-expensive stage three. Government receipts are likely to fall to around 21 per cent of GDP in 2020-21, reflecting weaker tax receipts from corporations and individuals and policies to forgive revenue.

Between the MYEFO in December 2019 and the Economic and Fiscal Update in July, the federal government made significant downgrades to tax receipts. Expect further writedowns, as the last estimates did not capture Victoria’s COVID-19 second wave. A fall in revenue (as a proportion of GDP) to at least the levels recorded during the GFC is also likely. Capital spending by the Commonwealth includes net cash flows from investments in non-financial assets, financing activities for leases and lease liability interest payments. It also includes capital grants to the states and territories and financial asset investments (for example, the equity funding of NBN Co and Western Sydney Airport Co).

These are not included in the above underlying cash balance calculations, which only capture recurrent spending. Commonwealth capital spending is clearly an important input into the real economy and likely to increase as part of the fiscal stimulus.

At the last fiscal update (MYEFO in December 2019), capital spending was estimated to be between $A45 billion and $A50 billion per year over the coming four years. ANZ Research estimates that could end up in the vicinity of $A10 billion to $30 billion more per year than was forecast. 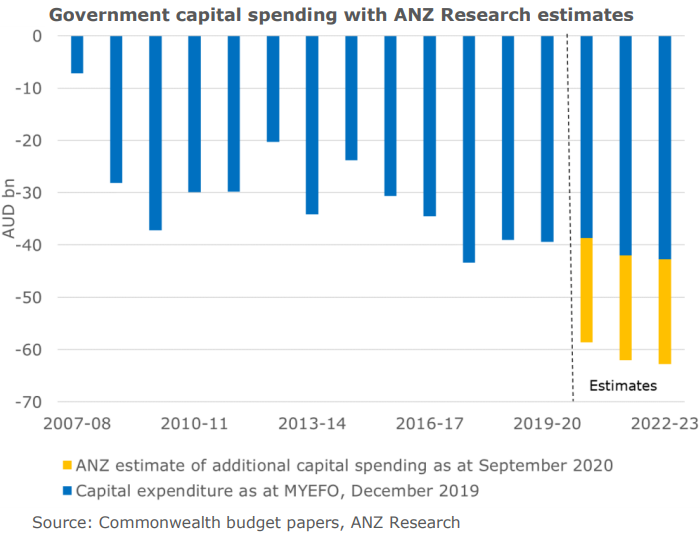 According to ANZ Research estimates and based on policy announcements to date, net debt rises to around $A700 billion or just above 36 per cent of GDP by June 2021.

At no point in the foreseeable future will net debt return to the projections that the Commonwealth published in the December 2019 MYEFO.

Although interest repayments also rise, with rates at record lows across the yield curve and managed by the Reserve Bank’s bond purchases, these remain manageable. The interest savings on maturing debt issued previously at a higher cost is an important offset.

Cherelle Murphy is a Senior Economist at ANZ

This story is an edited version of an ANZ Research report.

Payroll: the NPP’s next frontier