If any aspect of banking seems ripe for technological disruption, it’s cross-border transactions. Sending money from one country to another is often a slow, cumbersome and opaque process. Yet as e-commerce has exploded and even the smallest start-up can now sell its goods and services overseas, the need for smoother international transactions is becoming more acute.

Corporate treasurers are justified in asking when they can expect new technologies that have been generating considerable hype, such as blockchain, to make a material difference to their cash management and trade finance operations.

The answer is that anyone expecting rapid “Uber-level” disruption is likely to be disappointed: change will be evolutionary rather than revolutionary. On one level that may be a relief for those at large multinationals with legacy systems and processes in place, since adapting to incremental change is more manageable than scrapping and replacing entire processes at once. But it also reflects the reality of changing an immensely complex system involving multiple parties and complicating factors. Having the technological capabilities alone isn’t enough.

Consider the most basic questions that clients want answered when sending money abroad: how long will it take and how much will it cost? These are not complicated queries, and anyone wondering why, for example, they can easily track a parcel across borders but not a payment, would recognise that it’s not for a lack of available technology. Rather, it’s a matter of ensuring that all the factors that enable international correspondent banking – from regulations and laws to languages and data standards – are aligned, while also encouraging adoption on a scale sufficient to make a new solution viable.

The challenge of consensus

From a customer service standpoint the appeal to banks of being able to answer those basic questions is easy to see, especially as fintech entrants stand poised to take more of their business. Yet getting all parties in the correspondent banking network to commit to full transparency, as well as support new systems and standards to track payments, has been far from straightforward – even if the proposed underlying technology is built on existing systems rather than intent on disrupting them.

Partly this is due to conflicting priorities: many financial services providers have had other focus areas in recent years, such as ensuring compliance with waves of new prudential regulation, while the commercial appeal of rolling out sexier consumer-focused technologies, such as Apple Pay, has often outweighed investing in more quotidian improvements. But some solutions are now reaching critical mass.

SWIFT’s Global Payments Innovation (GPI) is the most prominent. Though it’s been in planning since 2015, the first stage, focused on improving the speed, transparency and tracking of cross-border business-to-business payments, launched this year with over 90 participants. Each is obliged to adhere to a service level agreement with transparent fees and timelines, while a cloud-based system will enable end-to-end payments tracking. The second phase, enabling payments to be stopped and recalled as well as the usage of rich data (to smooth compliance, reconciliation and other currently manual processes) will take another year or more to go live.

The right tools for the job

It is not clear that other much-hyped technologies are as close to having a meaningful impact. Take blockchain. The underlying distributed ledger technology (DLT) is certainly appealing in theory, allowing the centralised sharing of information – about an account balance, customer identity or any other data point – that is commonly collected manually by different parties, with attendant inefficiencies and delays in verification. But putting it into practice in the real world, at a scale sufficient for it to revolutionise cross-border transactions, is much more challenging than many fintech gurus would admit.

Bitcoin, to take the most famous application of the technology (and one that some promised would put banks out of business) quickly ran into problems when it started to draw the kind of regulatory scrutiny that banks have long had to comply with. Since then DLT has often been described as a solution looking for a problem.

To be sure, there are specific issues that DLT might help address fairly rapidly. In partnership with Wells Fargo we have been investigating a proof of concept using the technology to simplify the reconciliation of foreign currency (nostro) accounts held by correspondent banks.

This is a specific pain point but an important test. If DLT can be rolled out for this issue then its wider adoption, for example in liquidity management or trade finance, will be easier to implement. But it certainly won’t be a rapid process. Even where the problems are easy to identify, convincing everyone to get on board will take time.

This is true of another oft-cited (and utopian-sounding) application, paperless supply chain finance. Few would argue against the benefits of cutting out manual form-filling, but for it to work as it should every party in the process, from exporters to customs agents to insurers to freight and logistics providers, need to be on the same standards.

Using DLT obviates the need for the reconciliation of two accounts, since both parties would be using the same ledger. This would greatly improve the speed of cross-border transactions since both sides would be able to confirm rapidly whether the transfer or payment instruction was genuine and had the funding required to proceed, meaning monies could be released to the ultimate beneficiary much faster than under the current, long-winded, reconciliation system. 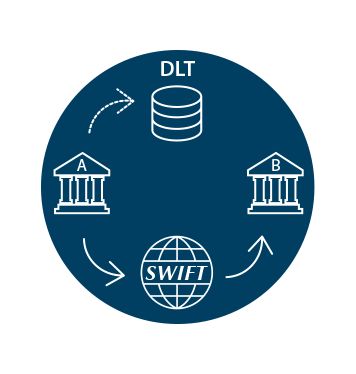 1. Bank A sends instruction via SWIFT and creates a linked request on the distributed ledger.

2. Bank B can view all its transactions on the DLT and their status in real time. 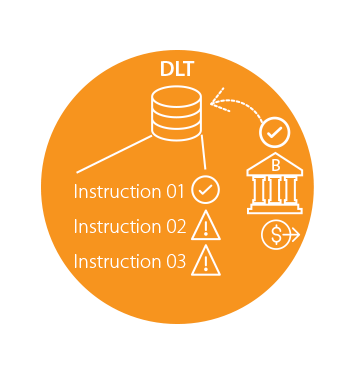 3. Bank B distributes funds and confirms the request on the DLT.

4. Bank A is immediately notified of the payment and can view the intra-day balance of their Nostro account.

Where does this leave corporate clients bombarded with information about the disruptive potential of financial technology?

Working in the real world

Then there are real-world issues that no amount of technology or industry-level consensus can resolve, specifically regarding local regulations. On top of compliance with international laws to combat financial crime, which have quite rightly become much more rigorous, the complexity of cross-border transactions in the Asia-Pacific region is sometimes compounded by still evolving local regulatory issues. China’s recent “window guidance” to banks on the rules surrounding the repatriation of funds offshore is one example.

Two key points are worth reiterating. One is that treasurers need to manage internal expectations about the pace of change. This will be more gradual, and incremental, than a lot of people are claiming. That said, in five years’ time the means by which clients access and track cross-border bank services are likely to be very different to processes today.

The second point is that, as mentioned, successful digital transformation of cross-border transactions will mean getting everybody on board: solutions cannot be imposed top-down by banks or regulators but must be the result of collaboration by all parties. To that end, companies need to scrutinise their supply chain partners and work out if they are preparing to the same extent to work in a world that requires high-quality, transparent and shareable data. If not, they could stand in the way of the successful adoption of new technology when it does reach critical mass.

In short, everyone needs to be travelling in the same direction to reach the ultimate goal of easier cross-border transactions.

For the many businesses in australia and new zealand whose operations depend on the unimpeded flow of transactions and capital across international borders, it’s a difficult time to be optimistic.

A guide to how Australia’s anticipated New Payments Platform will benefit banks and insurance companies.

The politics of anti-globalisation are in the ascendant. US President Donald Trump’s pledges to rip up trade deals and impose border taxes on imports appealed to many voters, as did on the other side of the Atlantic the prospect of the UK’s exit from the EU.