As expected, personal income tax cuts and infrastructure spend were in the spotlight for the 2019-20 Australian Federal Budget.

The 2019-20 Australian Federal Budget has been released, with a focus on personal income tax cuts, big infrastructure spend and the heralding of a return to a surplus.

The underlying cash balance projections are little changed over the coming three years compared to those prepared at the Mid-Year Economic and Fiscal Outlook (MYEFO) in December last year.

Economic conditions are projected to have boosted the cash balance in the current and next three years, with most of the benefit falling into 2019-20. Around two thirds of these benefits have been used by the Government to increase spending or reduce taxes.

The underlying cash balance is expected to be a deficit of $A4.1 billion (-0.2 per cent of gross domestic prouct) in 2018-19, which is virtually unchanged from MYEFO. Although receipts were revised higher and payments lower, the Government has chosen to give these away almost immediately with the low and middle income tax offset to be increased by $A550 from $A530 to a maximum of $A1080 and paid after individuals lodge their 2018-19 tax returns. Policy changes subtract a substantial $A3 billion from the bottom line in 2018-19.

The budget papers also note that the underlying cash balance builds to 1 per cent of GDP through to 2026-27. 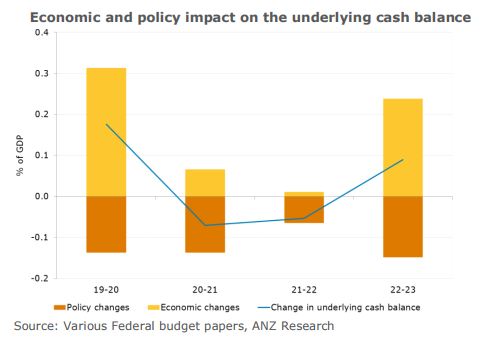 ANZ Research’s main concerns about the forecasts stem from the assumption that payments continue to fall as a share of gross domestic product (GDP) and receipts continue to rise over most of the forecast horizon.

In other words the projections are underpinned by a “no bad news” scenario. To be fair this is an understandable feature of such projections. 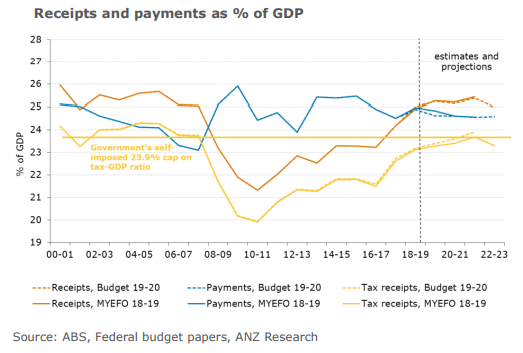 The economic forecasts underpinning the Budget look reasonable in the short term but further out are impacted by what ANZ Research sees as a slightly more pessimistic outlook for the terms of trade.

As expected, Treasury has made a big upward revision to the terms of trade in 2018-19 due to unexpected positive commodity price moves this financial year. As noted this has been responsible for a large part of the near-term upward revisions to receipts. 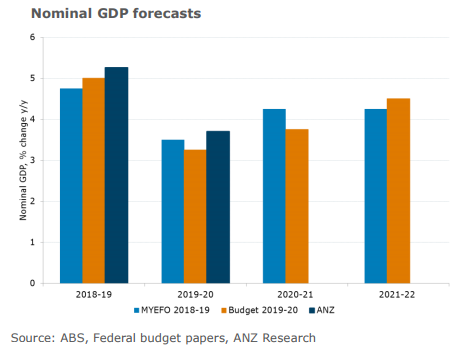 The Government’s instant asset write-off will be increased and expanded from $A25,000 to $A30,000 and access extended to businesses with turnover of up to $A50 million. This will come at a cost of $A700 million over the coming two years.

Capital spending has been revised up since MYEFO, by $A9 billion over the 2018-19 to 2021-22 years. Around $A6 billion of this is due to higher capital grants to the states and territories, with financial asset investments up by a net $A3 million. The profile of government capital spending is still expected to fall as a share of GDP over the coming four years despite the increases. 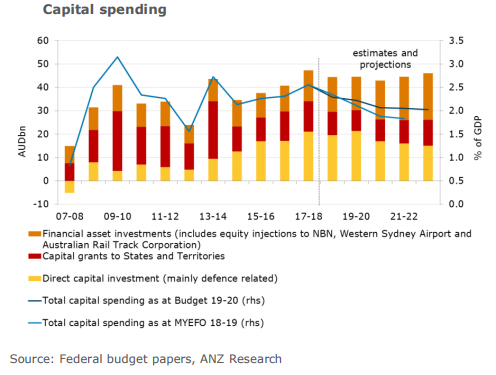 Unchanged in the short term

An increase in the value of Australian Government Securities due to lower yields than were assumed at the time of MYEFO, increases net debt in the 2019-20 financial year to 19.2 per cent of GDP (the previous projected peak was 18.5 per cent of GDP in 2017-18). But thereafter, with a mild improvement in the underlying cash balance over the coming four years, net debt as a share of GDP is expected to fall to 14.4 per cent of GDP by 2022-23.

The Government’s projections have an elimination of net debt by 2029-30. 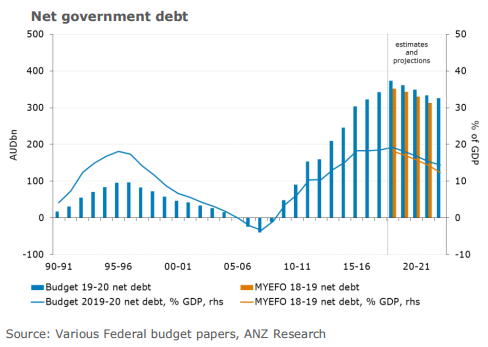 With the Parliamentary Budget Office highlighting the drawbacks of the net debt measure as an indicator of fiscal sustainability, ANZ Research has also looked into net financial worth. This shows the widened gap between net debt and net financial worth in recent years, but a projected recovery in this measure also, to -19.7 per cent of GDP by 2022-23. 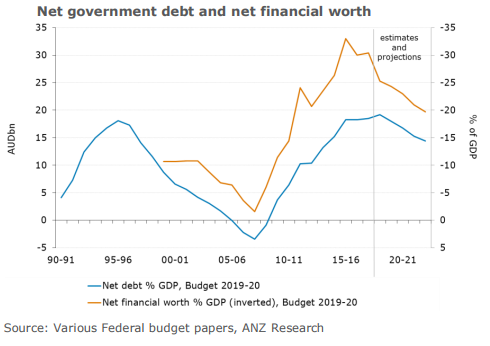 With the election looming and the opposition Australian Labor Party ahead in the polls, the alternative budget will be worth examining closely.

This budget shapes the outlook for a possible ALP Government’s fiscal agenda that is likely to be adopted in part, particularly the sections that offer lower taxes for low and middle income earners and increased spending on education and health.

The ALP has said it would issue a mini-budget in the third quarter of this year if it were to win office.

ANZ Research’s expectations are for no material change to the economic outlook if the opposition were in office post May. At the margin, there may be some small additional stimulus relative to the current outlook as an ALP Government may refocus some of the later tax cuts on low and middle income earners, which tend to have a higher marginal propensity to consume.

Labor also has policies to limit the tax benefits for new property investors who claim losses on their property income from established dwellings and share investors who, due to low incomes, do not pay tax.

This story orignally appeared as a note from ANZ Research.

Expect personal income tax cuts to be announced in the Australian federal budget – as well as new infrastructure spend. 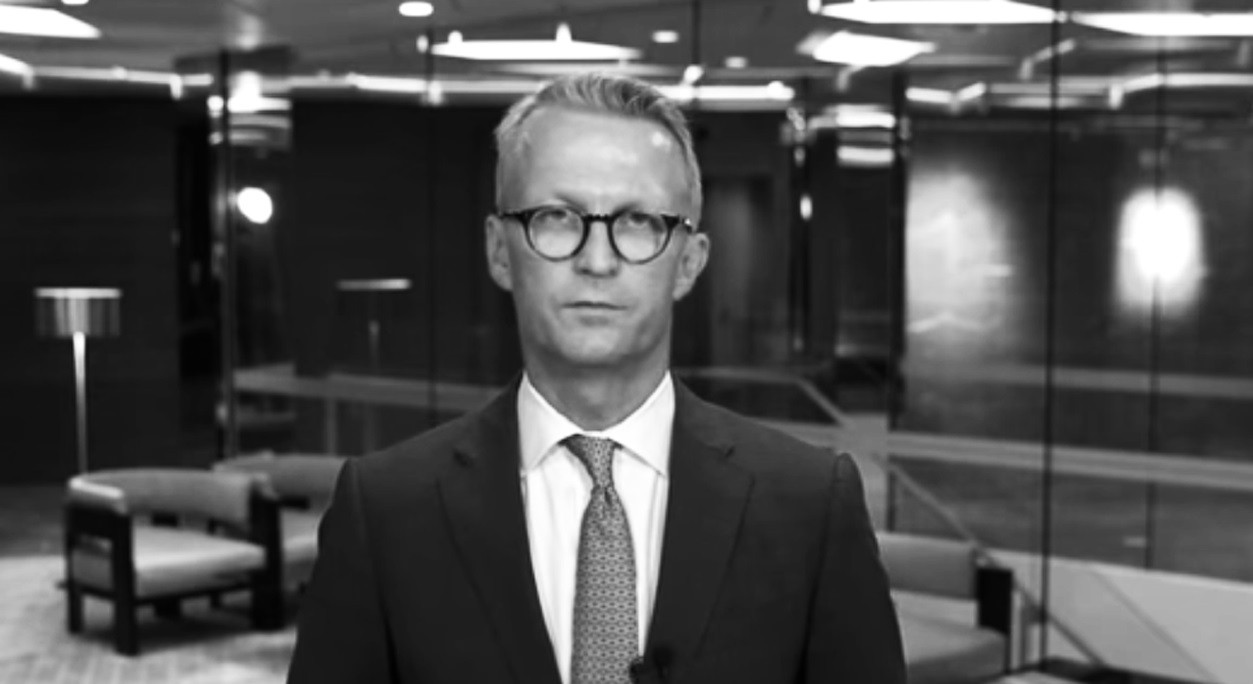 Looking beyond the tax cuts, the fiscal repair of the past half-decade is now giving way to economic support. 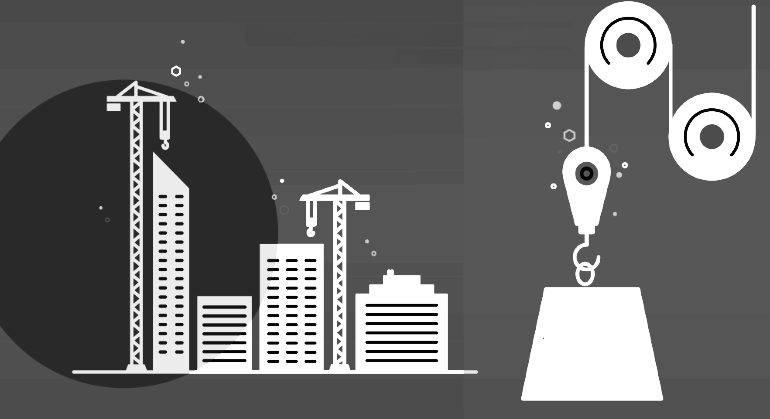 We’ve broken down the 2019-20 Australian Federal Budget into an easy-to-understand visual format.