How Vietnam can win the trade war

As the US and China square off, the Asian giant’s role as the world’s factory is under threat. Could others take the crown?

China is changing and can’t be the world’s factory forever. This manufacturing paradigm shift is only escalating as trade tensions with the US continue to heighten. But the world still needs things to be made – so who will pick up the slack? One south-east Asian country looks to have all the right ingredients: Vietnam.

Manufacturing has been Vietnam’s key growth driver in recent years. While global trade has stagnated Vietnam’s has soared from 70 per cent of its gross domestic product in 2007 to 200 per cent in 2017.

The manufacturing sector has been the key component of Vietnam’s foreign direct investment which has experienced a compound annual growth rate of 18 per cent from 2012 to 2017 (the majority of the capital sourced from Japan and South Korea).

Meanwhile, China’s role as the global manufacturing hub is in decline as an increasing number of elements prompt companies to diversify their investment. The factors which drove its position as a manufacturing darling - government reforms and the availability of a cheap, young workforce – are beginning to soften.

This prompts a critical strategic decision for multinationals in the region which “don’t think the trade war is a short-term crisis,” Joe Chau of the Hong Kong General Chamber of Commerce recently told the Financial Times.

Many multinationals are reviewing their global supply chains to address this concentration exposure and are looking to diversify by relocating production facilities to other countries.

“We have to analyse which Asian countries are good for our customers… to offset the China risk,” Chau says.

Head of Asia Research at ANZ, Khoon Goh, says Vietnam has opened its doors to foreign investment and removed barriers to doing business in the country.

“Vietnam is actually likely to benefit from the more fraught global geopolitical environment,” he says.

Through this period of global adjustment, manufacturing will flow down the path of least resistance - and greatest opportunity.

“China’s role as the global manufacturing hub is in decline as an increasing number of factors prompt companies to diversify their investment."

There several drivers for China’s decreasing attractiveness. These include (but are not limited to):

• Increasing wages. The average annual wage in China has almost quadrupled since 2005. The country has been rebalancing since 2007 towards a consumption-based economy.

• Measures to control leverage. The majority of China’s national debt is concentrated on the corporate balance sheet (163 per cent of gross domestic product in the middle of 2017).

The People’s Bank of China has recognised the debt problem and is trying to contain its growth - which could lead to a slowdown in economy.

ANZ was one of the first foreign banks to open In Vietnam and has operated in the nation since 1993.

As the hub for the Greater Mekong Region, ANZ Vietnam plays a pivotal role in the bank’s wider strategy, connecting customers with each other and with markets across the region.

ANZ Vietnam is capable of providing clients with a wide range of loan products through established onshore operations in Vietnam coupled with a regional presence and product expertise.

The bank has a great opportunity to support not only manufacturers as they relocate across ASEAN but also companies helping with the expansion of supporting infrastructure, such as power generation, ports and industrial parks.

• The trade war. Raw numbers show the total size of US tariffs applied exclusively to China is currently $US250 billion; from China to the US, $US110 billion. The effect on impacted sectors is enormous but the damage extends well into the broader global economy

The US has traditionally been a major trading partner of China, with around 19 per cent of the Asian giant’s total exports going to the States.

Import tariffs imposed by US President Donald Trump on 50 per cent of goods imported from China and the retaliatory measures by Chinese President Xi Jinping has increased the costs of exporting products from China to the US.

The country has already become a major exporter of textiles, electronic goods and footwear, among other items, with one in ten of the world’s smartphones produced in Vietnam.

As far back as 2017, the United States’ Fashion Industry Association noted the sourcing model in the sector was shifting from a ‘China Plus Many’ model to a ‘China Plus Vietnam Plus Many’ one.

Increasing trade liberalisation, deregulation, lowered costs of doing business and investments in human capital have contributed to the growing attractiveness of Vietnam as a manufacturing hub. Favourable factors include:

• Low labour costs & high productivity, Manufacturing wages in China rose from $US2 an hour in 2010 to $US3.9 an hour in 2016. This compares to $US1 and hour to $US1.4 and hour in Vietnam (although it should be noted there are significant wage gaps between central and south Vietnam).

• Young workforce. Right now 70 per cent of Vietnam’s population is under 35 years of age, according to the World Bank, with an emerging middle class expected to exceed one quarter of the total population by 2026.

• Trade liberalisation. Vietnam is among the top nations in East Asia in terms of free-trade agreements, including ASEAN, the US, Japan and South Korea.

Vietnam’s upcoming FTA with and the European Union, under which both parties will gradually reduce tariffs over a period of roughly a decade in relevant sectors, could boost Vietnam's economy by 15 per cent of GDP. 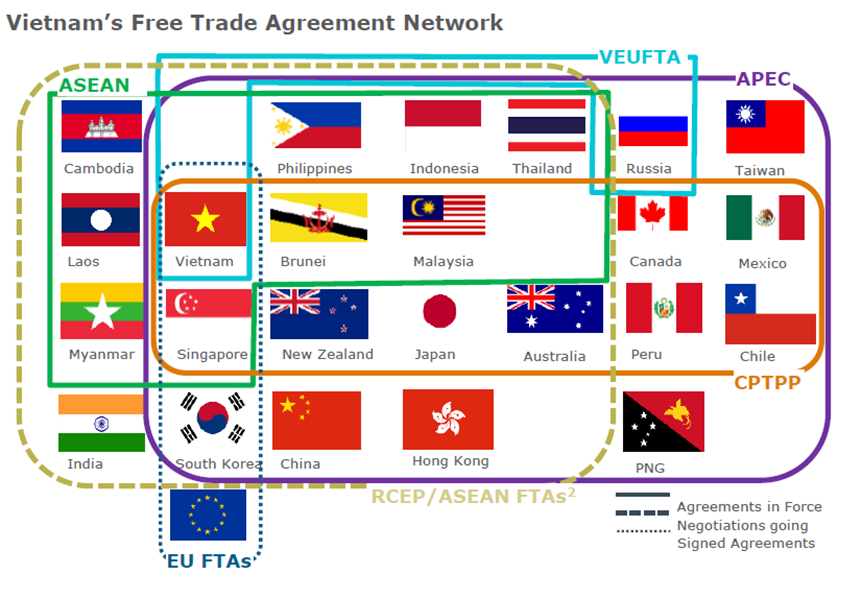 There a several notable examples of multinationals with manufacturing bases in Vietnam, including:

• Adidas & Nike.  A decade ago China was the main footwear producer of these sportswear giants but Vietnam now owns the title. Since 2010 Adidas has halved the share of footwear it makes in China.

The country that has absorbed most of that business is Vietnam (44 per cent of Adidas’ shoes were made in Vietnam in 2017, compared to only 31 per cent five years ago).

The share of Nike shoes made in China reduced significantly, going from 32 per cent in 2012 to 19 per cent in 2017. Low-cost labour and FTAs with major nations have been the leading factors for Adidas and Nike’s movement.

• Samsung. The South Korean technology giant is the largest foreign investor in Vietnam and accounts for a quarter of the country’s total export revenue, largely due to smartphone production.

Samsung has invested $US17.3 billion in eight factories and one R&D centre in Vietnam. The group recently said it will recruit more Vietnamese and develop electronics in smart cities in Bac Ninh province and other cities.

• Intel. Tech icon Intel opened a massive $1 billion chip testing and assembly facility in Vietnam in 2010, the company’s biggest facility in the world. The factory is located in Ho Chi Minh City and has a total area of 46,000 square metres.

Intel has publicly stated the error rate in Vietnamese-made chips is low compared to other countries, making Vietnam an attractive location for such manufacturing.

• A favourable investment climate and economic stability. Vietnam has higher scores in the World Economic Forum’s ‘competitiveness’ and ‘ease of doing business’ indexes than regional counterparts. The government has relaxed restrictions on foreign investment and seeks to promote more investment in listed firms.

• Taxation & Incentives. Vietnam cut its corporate income tax rate from 32 per cent to 20 per cent in 2003. Tax incentives are provided for tech, healthcare, education, clean energy and infrastructure sectors, as well as suppliers in the apparel, IT and automotive sectors.

There are no winners from war but Vietnam looks poised to benefit from the US-China trade fallout.

Looking for Opportunity in a Geopolitical Recession

We have entered a new world order where the U.S. is no longer the global leader – and that has ramifications for not just economies, geopolitics and security but even the shape of the internet, according to Ian Bremmer, one of the world’s most highly regarded political scientists.

In Asia, the worst is behind us

Markets have priced in a further slowdown amid a maturing global trade cycle.