The second article of the ‘Signals from the Noise: Distinguishing Hype from Opportunity in Asian Asset Management’ series, produced in collaboration with FT Confidential Research.

THE OPENING OF CHINA’S CAPITAL MARKETS IS UNDOUBTEDLY THE LARGEST LONG-TERM POTENTIAL DRIVER OF ASSET MANAGEMENT ACTIVITY IN ASIA, BOTH IN TERMS OF FUND INFLOWS TO CHINA, AS RENMINBI-DENOMINATED ASSETS BECOME MORE WIDELY INVESTIBLE, AND POTENTIAL OUTFLOWS AS ONSHORE RETAIL AND INSTITUTIONAL INVESTORS LOOK TO DIVERSIFY THEIR PORTFOLIOS.

HOWEVER, IN RECENT MONTHS QUESTIONS HAVE BEEN RAISED ABOUT THE SPEED WITH WHICH GLOBAL ASSET MANAGERS WILL BE ABLE TO CAPITALIZE ON THESE OPPORTUNITIES, AND THE APPROPRIATE STRATEGY TO DO SO.

The domestic opportunity is certainly massive, and growing fast. China’s asset management sector expanded by six times from 2012 to end 2016, according to the main industry regulator, to over US$7 trillion.1 Institutions like sovereign wealth funds, insurers and pension funds hold the lion’s share of assets under management (AUM) and are expanding rapidly. Assets in Chinese pension funds ranked among the largest globally by Willis Towers Watson rose 18% in dollar terms annually between 2010 and 2015, compared to growth of around 6% for North America funds and 4% for those in Europe.

More and more of these funds will be outsourced: total outsourcing from the National Social Security Fund (NSSF) and enterprise annuity schemes rose from Rmb800bn (US$115bn) at end-June 2014 to Rmb1.2trn at the end of June 2016, according to ratings agency Fitch.

Chinese insurers, too, have been taking larger bets with their assets in order to match their growing liabilities, opening opportunities for third-party asset managers.

More funds will also be allocated offshore. State-owned insurer China Life, to take one example, last year announced plans to increase its offshore allocation from 2% to 15% of its US$360bn under management.

On the retail side, meanwhile, savers have been starved of investment vehicles, with a mass of pent-up wealth worth more than US$20trn by some estimates. Given the potential size of the market, it is no surprise that in a survey of asset managers in the region by Asian Investor in July/August 2016, the largest proportion (47%) picked the Mutual Recognition of Funds (MRF), a scheme under which Hong Kong and Mainland China funds can be cleared for distribution in both jurisdictions, as the best platform in the region for business growth. Many fund managers are setting up Hong Kong domiciled products to establish a track record (and build sufficient AUM) to allow them to participate.

The extent to which, and when, the vast China market will fulfil its potential for global asset managers depends heavily on the expansion of options available to Mainland investors. The MRF is just one of several schemes designed to ease access to offshore markets, like the Qualified Domestic Institutional Investor (QDII) program and the ‘Stock Connects’ linking the Shenzhen and Shanghai exchanges with Hong Kong.

But efforts to move capital offshore will accelerate only as fast as China’s regulators allow. Any instability in the markets or currency typically prompts authorities to move to stem outflows, as seen in late 2016 when the yuan suffered its biggest annual plunge in over two decades.

Concern about capital outflows had already delayed the approval of licenses under the Qualified Domestic Limited Partner (QDLP) initiative, which allows foreign asset managers to set up renminbi funds to invest overseas, while mainland approvals for funds under the MRF scheme have also been far slower than expected. Meanwhile, clarity on the asset-management services that wholly foreign-owned entities (WFOEs) will be able to provide is also eagerly awaited.

Matters are somewhat simpler for those looking to expand their exposure to mainland assets, as China has steadily become more open to inbound investment. In February 2016 international institutional investors were granted quota-free access to the US$7.3trn onshore interbank bond market. China also relaxed quota rules for the Qualified Foreign Institutional Investor (QFII) programme, giving license holders an automatic quota based on their AUM, while rules on the Renminbi QFII scheme were relaxed along similar lines in September.

Such efforts are all part of China’s bid to transform the renminbi into a global investment currency — something given an official imprimatur by its inclusion in the reference basket for the IMF’s Special Drawing Rights in October 2016. By easing quota restrictions, authorities aimed to satisfy the demands of providers of global benchmarks for greater liquidity before they include Chinese assets in influential indices. 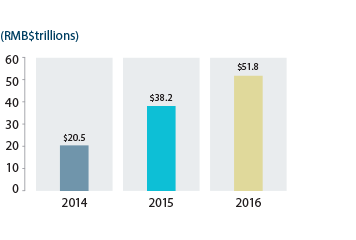 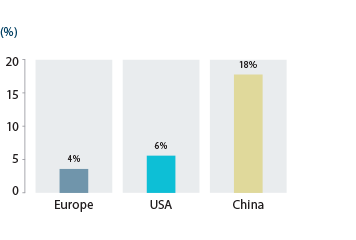 Such inclusion could in theory dramatically boost inflows to China as investors in benchmark-tracking products would be obliged to buy RMB-denominated assets according to their weightings. Some estimates suggest the inclusion of Chinese equities in MSCI’s Emerging Markets Index will lead to an initial inflow of around US$20bn, rising to as much as US$180bn if all A-shares are included at their full weight.2

However, the events of 2015, in which a collapse in stock prices prompted China’s authorities to introduce emergency measures such as preventing share sales to prop up the market, seriously dampened global fund managers’ enthusiasm about Chinese equities. The appeal of the onshore bond market, meanwhile, despite superficially attractive yields, is undermined by opaque risk metrics. The yuan’s devaluation since the Foreign Exchange mechanism reform on 11 August 2015 (and the official response) have also spooked some investors and called the currency’s liberalisation into question.

Full capital account opening, interviewees for this series suggested, is unlikely before 2020. Even then, only a minority of fund managers in a recent ANZ/FT Confidential Research poll said it would be “a given” that allocations to China will rise, owing to structural problems facing the economy (such as rising indebtedness) and country risk.

Indeed, liberalisation is not expected by most respondents to be a big driver in increasing asset allocations to Asia in general. Given recent events, many are either rethinking their mainland approaches or are content for now to watch and wait.

Whichever the direction of flows, fund managers expect the opening of China’s capital account to increase liquidity in Asia. But some serious questions remain about the pace and scale of this opening, and hence China’s role in regional asset management, amid a more volatile global environment. 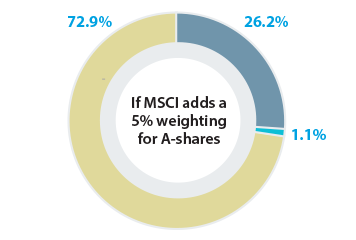 The Asia-Pacific Region will be crucial to the future of Asset Management, with AUM growing at nearly twice the global rate.