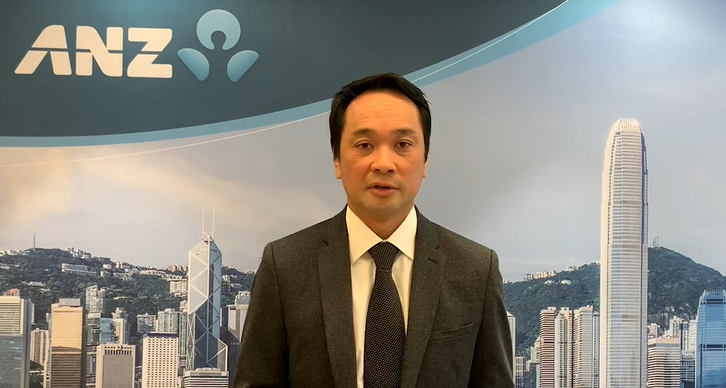 China wants to grow – and what happens next will have a huge influence on the global economy over the next two decades.

When China opened its economy to the world in 1979, the wish of China’s then-leader Deng Xiaoping was for the country to become “moderately prosperous (小康社会)”.

In 1987, Deng proposed to quadruple China’s GDP by the end of the 20th century. It was just 7 per cent of the US’s GDP at that time, so quantifying future growth was deemed sensible for China.

At China’s Fifth Plenum this year, President Xi Jinping said China will become a “mid-tier developed country” by 2035. Under his New Development Concept (新发展理念), China’s GDP per capita is expected to double from the current level to $US20,000, which is similar to modern Greece or Portugal. Given China’s economic status now, this policy goal is also considered sensible.

The reality is Xi’s plan represents a strategy for growth, not a target for growth. The package covers a range of areas, including tech self-sufficiency, social equality, going green and other objectives beyond GDP.

Xi is not content to add 4 trillion to 5 trillion yuan of GDP a year. He wants to market a business model for “the community with a shared future for humankind” (人类命运共同体) and to exhibit the “China way”, not just “China speed”.

The implications of the plan are wide. By 2035 ANZ Research expects China may deepen its engagement with foreign companies. Mergers and acquisitions are possible, giving birth to some global brands.

More than 80 per cent of China’s retail sales could be conducted online, according to linear projections. If household income doubles, the world could see Chinese tourism spending of $US255 billion in today’s prices, equivalent to Vietnam’s GDP.

Global investors will likely increase their yuan exposure in onshore financial markets. ANZ Research believes the yuan will appreciate as it is 60 per cent undervalued by purchasing-power parity. Capital inflows will narrow this gap.

China to double GDP by 2035: what it entails
Infogram

Geopolitical tensions between China and the rest of the world are running high. A US under a Joe Biden presidency does not guarantee improved relations. Various concerns will continue to cloud China’s foreign affairs; these could easily spill over to commercial relations.

ANZ Research believes China is committed to opening up and staying open for business, as it will enter more free trade agreements (potentially with South Korea and Japan), investment agreements (with the EU) and even regional blocs (with the Regional Comprehensive Economic Partnership). But partners will still be wary about specific issues.

If China fails to boost its productivity and reduce overreliance on liquidity injections, it could fall into a liquidity trap, similar to what happened during Japan’s ‘Lost Decade’. Failure to transform the economic structure will lead to over-capacity of the old economy. Deflation risks loom.

Production capacity backed by high leverage will weigh on investment returns. An ageing population without sufficient income improvement will be detrimental to property prices. This will in turn intensify downward pressures on domestic prices.

The supply-side reforms being implemented will be critical to the sustainability of the plan.

There will be challenges. In the immediate term, these include ‘implicit government guarantee’ of local debts, intricate relationships between local enterprises and governments, and close ties between fiscal revenue and property.

Tackling these legacy issues requires willpower and acute judgement. As employment affects social stability, policy-makers are unlikely to adopt a ‘big-bang’ approach. From this perspective, 15 years will be a relatively short window for policymakers. 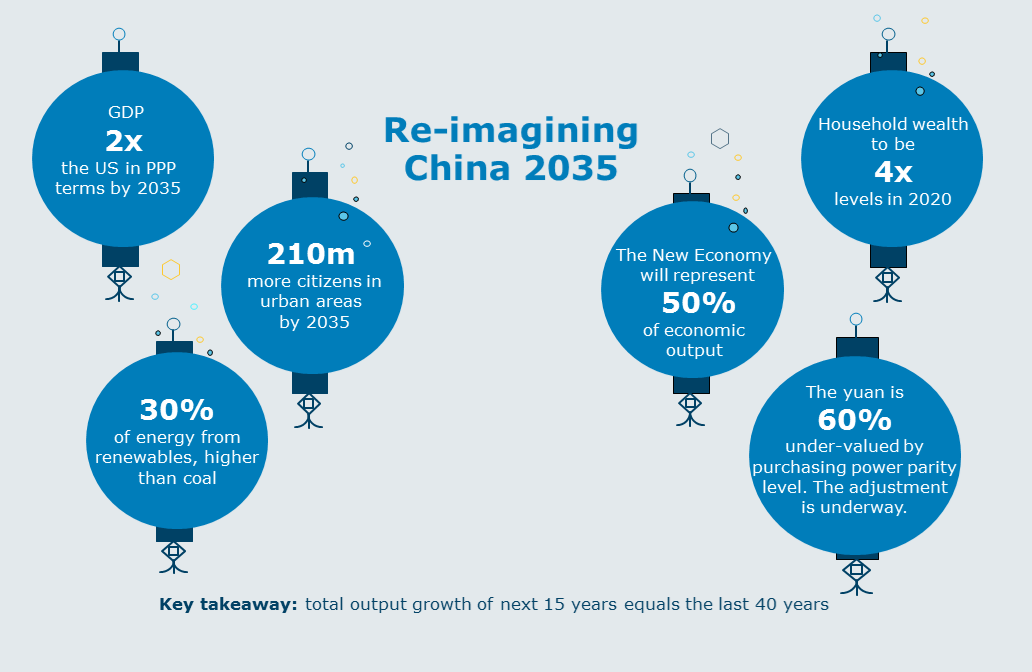 With quantity of labour is no longer a selling point for China, other solutions are needed. First, innovation will increase China’s multifactor productivity to offset the negative impact of a shrinking working age population. Second, urbanisation will improve income and hence consumption.

Urbanisation can also address the urban-rural income disparity. In 2019, disposable income per capita of rural households was 16,000 yuan, only 37.8 per cent of the income of urban households.

This development will continue to drive China’s urbanisation rate. At present, that rate is 60.6 per cent, 15 percentage points lower than the level of Japan in 1980.

As China increases its urbanisation rate by 1 percentage point annually, it will urbanise additional 210 million people and double the average income per capita by 2035.

China’s economic rebalancing is often interpreted as a shift towards a consumption and service-led economy, with manufacturing and investment declining. However, China has never lost sight of manufacturing.

The hollowing out of the industrial base in Japan and the US has provided a vivid lesson for China. The trade tensions with the US and high competition in the global tech sector have further urged China to secure its manufacturing sector, especially in the high value-added segment.

This is the foundation of the real economy, noted in China’s 14th Five-Year Plan. A stable manufacturing sector will prevent economic growth from sliding dramatically, especially when the sector’s productivity is lifted.

The next 15 years will see the formation of several city clusters. Population will start to move away from several mega cities. Peripheral cities will be connected via a highly efficient transport network. The goal is to develop ‘one-hour life circle’ routes.

Fifteen years ago, China began to plan for its high speed rail project. Today, the network has covers 36,000 kilometres in total. As the country urbanises, the HSR will also double to 70,000 kilometres.

China has established targets in adherence with the Paris Agreement, including a 20 per cent share of non-fossil energy in total energy consumption, a 60 per cent to 65 per cent reduction of carbon intensity compared to 2005, and to peak its carbon emissions before 2030. China has announced to target zero net emission before 2060.

To achieve these goals, China will likely meet the bulk of its new energy demand with renewables during the 14th five-year plan period. The shift to new energy sources will help China’s industrial upgrade.

The supply side will benefit from renewable energy capacity investment, while electrification will accelerate technological progress in manufacturing. The economy will also benefit from the cost efficiency of new energy.

ANZ Research estimates China will add 800 gigawatts of new renewables capacity, or 4 trillion in investment, based on 2019 global benchmark capital cost per megawatt during the 14th five-year plan. Along with other plans, these will add at least 1.8 percentage points to annual growth in the next five years.

Within the national security framework, energy safety is a growing concern and received a special mention in the 14th five-year plan. The development of renewables will help China reduce its reliance on imported fossil energy, which is easily affected by rising geopolitical risks.

In 2019, China’s energy self-sufficiency rate was 81.5 per cent. China has set a goal of 95 per cent by 2050, meaning China will by then be able to supply its own domestic energy demands.

China’s wealth increased at an average pace of 17.7 per cent in 2001-2016, 4.2 percentage points higher than nominal GDP growth. If this trend is maintained in the next 15 years, the national wealth in 2035 will be four times that in 2020, making China the world’s largest wealth market.

China’s growth will be around 5 per cent in the next 15 years, higher than developed economies. The RMB will gradually appreciate as productivity increases, as implied by the Balassa-Samuelson Effect. China’s assets will be revaluated and financial wealth of China will rise.

Comprehensive financial reform will be necessary to deepen China’s securitisation in the next 15 years. The market-based interest rates and exchange rates remain at the core of that reform. The continued opening-up of the financial markets, as stated in the 14th five-year plan, will be helpful.

If Milton Friedman’s permanent income hypothesis is any guide, China’s national wealth is where the purchasing power of Chinese shoppers comes from. Some economists may overlook the implications of Friedman’s theory, but it is hard to look past the Chinese crowds on the Avenue des Champs-Elysees.

This story is an edited version of an ANZ Research report. You can access the original report HERE.

How NZ will fare with RCEP