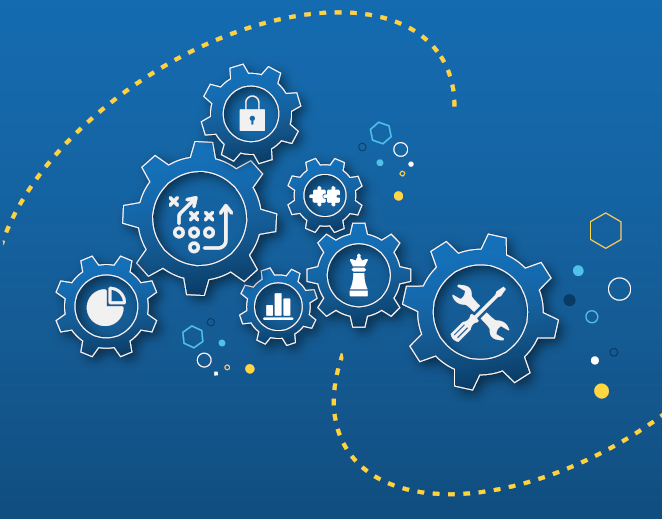 The Covid-19 pandemic is shaping up as a pivotal period for macroeconomic policy making in the Asia-Pacific region. As the pandemic spread rapidly in the first half of 2020, economic policymakers were confronted with a series of challenges that forced them to think creatively, expand their policy toolkit, and push the limits of orthodoxy. By creating a new crisis response playbook, these efforts are likely to have far-reaching and lasting consequences across the region. They may also presage future experiments with unconventional policies. There is even some risk the discussion around Modern Monetary Theory (MMT) spills over from the advanced economies.

First, the closure of a large portion of the Chinese economy and the disruption of shipping and air transport posed a severe supply-side shock both to global output and to Asia’s regional supply chains. Second, the adoption of strict lockdown measures around the globe, accompanied by a sudden-stop of capital flows to emerging markets, resulted in a sudden and sharp retrenchment of global demand and financing. This occurred against a deflationary backdrop, as commodity demand plunged, and an oil price war between Saudi Arabia and Russia triggered a collapse in global energy prices.

The USD remains the pre-eminent international funding currency, accounting for around half of all cross border bank loans and international debt securities. As such, the Fed remains a crucial influence on global monetary conditions. US policymakers responded quickly to the pandemic with unprecedented fiscal and monetary expansion. In addition to cutting interest rates aggressively, the Federal Reserve began large-scale asset purchases and extended swap lines to keep dollars flowing to other central banks, including to the Bank of Japan, the Monetary Authority of Singapore, and the Reserve Banks of Australia and New Zealand. Meanwhile, the US Congress delivered massive fiscal stimulus, on the order of 14% of GDP, to shield US businesses and consumers from the worst economic effects of the pandemic.

AN EXPANDED TOOLKIT FOR ASIA’S POLICYMAKERS

These measures rapidly eased global liquidity conditions, allowing policymakers across Asia-Pacific to break new ground. As their economies went into lockdown, Australia and New Zealand unveiled an array of subsidies and benefits to support businesses and households forced temporarily out of work. Economies across the region combined increased transfer and healthcare spending with monetary expansion; importantly, without provoking financial instability. Monetary interventions took the form of policy rate cuts, as well as an easing of macroprudential regulations, other forms of regulatory forbearance, and the provision of low-cost liquidity to the banking sector. In some cases, monetary authorities also lent their support to SME lending, either through credit guarantees or fundingfor- lending schemes. Crucially, however, new tools were in operation.

The Reserve Bank of Australia combined interest rate reductions with a secondary-market asset purchase program targeted at government debt. It also scaled-up the frequency of its repo auctions. Furthermore, capital requirements for banks and rules on the quality of collateral for open-market operations were eased, and a USD swap line with the Federal Reserve was established. The Reserve Bank has also instituted a term-lending facility to keep bank credit flowing to small businesses.

The Reserve Bank of New Zealand cut its official cash rate by 75 basis points in mid-March and has since implemented a Large-Scale Asset Purchase Program to buy public-sector debt. It also increased the government’s overdraft facility and extended liquidity provision in the foreign-exchange swap market, in addition to administering a USD swap line extended by the Federal Reserve. The Reserve Bank has provided the financial sector with collateralized lending facilities, loosened capital and regulatory requirements, and is participating in a government guarantee scheme for business financing, as well.

The People’s Bank of China took a somewhat different route in responding to Covid-19, injecting about RMB3trn medium to long-term liquidity into the banking sector through open market operations, expanding re-lending and re-discounting facilities and reducing required reserve ratio for banks. It cut interest rates on short-term and medium-term lending and excess reserves to bring down funding cost and expanded credit to small and medium-size firms. A funding-for-lending scheme was also introduced, and the government made regulatory changes to prevent a tightening of financial conditions in the real economy.

Meanwhile, the Bank of Japan has pledged to buy unlimited government bonds and instituted special funding operations for banks to facilitate lending to corporates. It also increased its purchases of exchange-traded funds (ETFs) and Japan-Real Estate Investment Trusts (J-REITs), as well as targeted purchases of commercial paper and corporate bonds. In late May, the Bank of Japan introduced a program to ensure financing to small and medium-sized businesses, and since mid-March, it has participated in a USD swap line provided by the Federal Reserve.

Breaking new policy ground also extends to the smaller emerging economies in the region. In Indonesia, after a reduction in interest rates, the central bank lowered reserve requirement ratios for banks and extended a variety of liquidity facilities to the banking sector. Macroprudential regulations have been eased, and the government has given the central bank the power to extend liquidity assistance to banks, purchase government bonds in the primary market, and finance the deposit insurance agency. Likewise, Bangko Sentral ng Pilipinas reduced interest rates substantially and steeply lowered the reserve requirement ratio for commercial banks. The central bank also purchased about 1.5% of GDP in government debt and made a PHP20bn remittance to the government. It announced a range of regulatory easing measures and facilitated access to its discount facility.

The most remarkable – and unprecedented – policy development was the use of asset purchase programs across much of the region. Historically most emerging markets, including those in Asia, have faced market financing constraints that prevented recourse to such quantitative toolst and, in some cases, counter-cyclical policy responses altogether. But ample liquidity provision by developed-market central banks, as well as subdued inflationary pressures and heightened policy credibility, have allowed authorities across the region o go beyond rate cuts, purchasing local-currency debt to inject liquidity into the economy without triggering excessive currency volatility.

Certainly these countries’ programs have been on a much smaller scale than in many advanced economies, including in Australia, New Zealand, or Japan, and it remains unclear to what extent they will be able to continue to do so without shaking market confidence and ultimately discovering the limits of debt accumulation. The reality, however, is that many economies in Asia have acted in bond markets across a broad front, for the first time, during an unprecedented period of very weak economic conditions and heightened uncertainty. The significance of that development shouldn’t be under-estimated. Most programs were delivered to improve market functioning, rather than to ease financial conditions materially. The fact that most countries in Asia implemented their programs while policy rates were still positive is evidence of this. QE in advanced economies has occurred almost entirely when interest rates are already at the zero lower bound. In addition, the size of the purchases has not been out of the ordinary for the most part. Central banks normally purchase bonds as part of their monetary operations, most commonly for use as collateral for repo transactions. 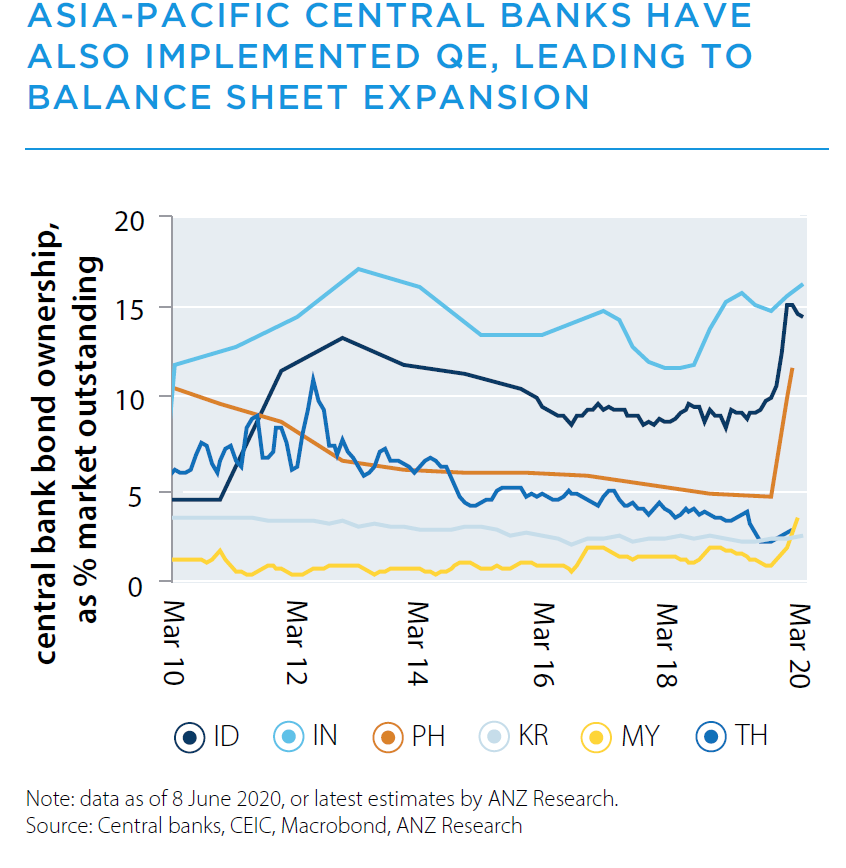 LOOKING AHEAD: POLICYMAKING IN THE POST-COVID WORLD

The normalization of unconventional policy has several long-lasting implications. Although the global real economic cycle will move even closer to Asia in the coming years, the Federal Reserve remains the driver of the global financial cycle. Importantly, however, the ‘quality’ gap between emerging markets (EM) and developed markets (DM) has narrowed.

Political risk is no longer just an issue for EM. It is very much an affliction in DM, including the US. Given the acute polarisation of the American electorate, US domestic politics have become more volatile than at any time in recent memory. Institutional risk is now prevalent in DM, as suggested by the uneven response of some advanced economies, including the US and UK, to the Covid-19 epidemic. This stands in contrast to the generally credible response across much of Asia. Finally, policy independence used to be a concern primarily in EM. But in DM it is where the lines between fiscal and monetary policy have become most blurred through the last two crises.

Importantly, the Chinese yuan has been broadly stable throughout the pandemic, alleviating concerns of a devaluation that could have tightened financial conditions throughout Asia-Pacific and led to a destabilizing series of currency depreciations and other responses across the region. This is the third crisis in succession where fears of large-scale CNY depreciation have proven to be unfounded. This is a notable trend. Moreover, it was only in the month of March 2020 that China saw foreign investors exit the bond market. Every other month this year has seen inflows, particularly May, which recorded the second largest month of inflows on record.

Importantly, Chinese authorities have eased less aggressively than their US and Asian counterparts, and the Chinese financial account remains quite carefully managed, reducing the global spillovers of Chinese monetary policy. Asia’s monetary policymakers will continue to take their cues from the Fed rather than the People’s Bank of China for the foreseeable future, but China’s economic and market stability has acted as a crucial stabiliser for the region.

Despite their apparent efficacy as a near-term stabilization tool, the widespread and rapid deployment of unconventional policies also present some risks once the Coronavirus crisis subsides. Given the relatively smaller size of those programs in Asia, however, and the narrowing risk profile between emerging Asia and DM, those risks shouldn’t be overplayed. Certainly central bank asset purchases might not be met with market approval in the context of larger interest rate differentials with the US or a more inflationary global environment. But if a somewhat more inflationary environment does materialize, many would probably welcome that.

COVID-19: A WATERSHED FOR UNCONVENTIONAL POLICIES

The coronavirus crisis is likely to prove a watershed for macroeconomic policymaking in the Asia-Pacific region. Amid an unprecedented economic shock—and in the wake of decisive action from policymakers in the US—authorities have effectively combined the fiscal and monetary tools at their disposal to protect incomes and livelihoods. The crisis has spurred policy innovation, prompting officials in Asia-Pacific’s emerging markets to add new tools to their repertoire, such as more widespread use of asset purchase programs. These are significant developments. While they also come with distinct risks, so do the policymaking trends in advanced economies.

The combination of large-scale fiscal and monetary easing in response to Covid-19 could also presage further forays into unconventional policy in response to future economic shocks, potentially including applications of MMT. MMT holds that countries issuing debt in their own currencies cannot be forced to default on their (local currency) sovereign debt because the country’s central bank can always backstop the government if necessary. MMT supporters also claim fiscal policy should be the primary cyclical stabiliser of the economy because it has a more direct impact on economic activity with fewer negative side effects than monetary policy. Some aspects of MMT remain quite controversial, and hence the probability of its pure application is low, but it is likely to be discussed with increasing frequency.

How to survive a crisis