RISING MIDDLE CLASS WEALTH IN ASIA HAS TRIGGERED A REVALUATION OF GLOBAL CREDIT AMONG ASIAN INVESTORS, ESPECIALLY THE OFFSHORE US DOLLAR BOND MARKET. THIS REVALUATION HAS CREATED A DEEP POOL OF LIQUIDITY ACROSS THE WORLD’S MOST DYNAMIC REGION FOR BOTH ISSUERS AND INVESTORS.

Often referred to as the ‘Regulation S’ market (or, ‘RegS’ for short), RegS provides a “safe harbour” that exempts offering of securities from the registration requirement under Section 5 of the US Securities Act 1933, allowing global and regional corporates to offer US dollar denominated debt securities outside the US.

US dollar bonds in Asia were until recent years seen as a source of secondary or supplementary funding for many borrowers, given that funding requirements have generally been in local currencies. But today, even as local Asian governments from India to Indonesia encourage the development of their own bond markets, the region’s expanding pool of investors want more exposure to US dollar assets as they search for diversification, higher yields and lower risks. This has, in turn, provided issuers with a larger funding alternative at competitive costs relative to the local currency markets.

As Asians fund the region’s growth in US dollars, expanding Asian liquidity pools have meant the RegS market is dominating the USD primary market, with its growth clearly outpacing the growth in the 144A market – in which foreign companies sell US dollar debt to qualified US-based investors.

The comparatively simple and straightforward process of raising funds, coupled with the ability to match the size, tenors and pricing of the global USD formats has meant that the RegS market is now becoming the natural issuance path for many borrowers.

While Asia may be home to rising currencies such as China’s renminbi (RMB), it’s obvious that the US dollar markets will continue to play a major role in the region’s transformation for the foreseeable future.

Moving into 2018 and beyond, issuers and investors would do well to consider this expanding pool of liquidity as a key source of funding or investment. 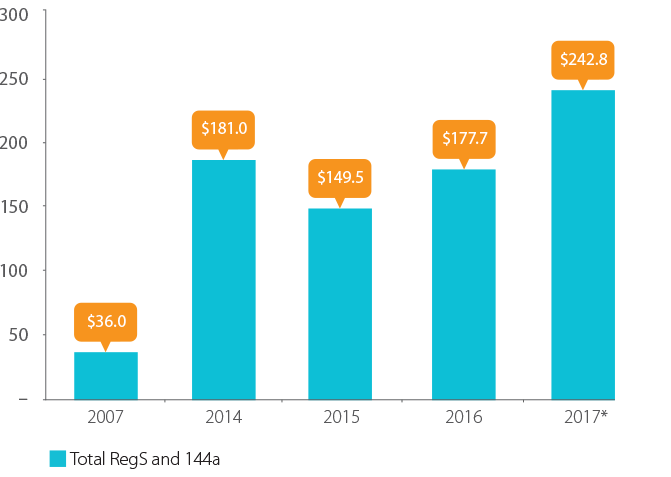 Source: ANZ, includes both RegS and 144A; issuers are those in the JPMorgan Asia Credit Index (JACI) representing Asia-ex Japan/Australia’s issuers

1. RIDING ON THE BACK OF ASIA’S MIDDLE CLASS

What’s changed in the RegS market in 2017? Why has excitement about the market’s potential intensified in recent years?

First, let’s take a look at the numbers. Asia-ex Japan/Australia’s USD bond market could reach US$1 trillion by 2020, according to ANZ data. USD bond issuance year-to-date reached US$224 billion, up from US$130 billion a year earlier, with RegS accounting for 78 percent of the issues. Investment grade bonds accounted for 62 percent of new issues, with 23 percent high yield, and 16 percent non-rated.1 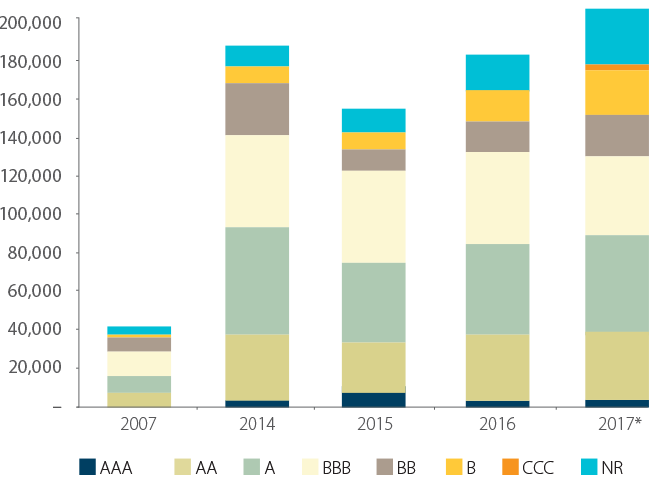 What’s driving this voracious and diverse appetite for RegS issuance in Asia?

#1 First and foremost is the rise in middle class income across the region. For example, by 2025 125 million ASEAN households are expected to attain middle-class status.2

#2 The second force accelerating this hunger for US assets is investor and issuer flight from riskier Asian currencies, and a persistent view that the US dollar is still a safe haven in these uncertain times.

#3 And third is a broad shift in capital flows globally. In recent months, there has been increasing demand for US dollar credit from Asian pension funds and sovereign wealth funds – based anywhere from China, Japan and Singapore – due to a lack of opportunity in local currency markets.


2. TOO LEVERAGED TO CHINA?

While Asia’s RegS market has grown exponentially in recent years, the bulk of the market is composed of bonds issued by Chinese institutions such as banks and state-owned enterprises, and bought by Chinese investors, according to ANZ research.

China made up about 47 percent of the US$730 billion market as of June, and is 64 percent of Asia-ex Japan/Australia’s new issuance year-to-date.

The drivers of this trend are easy to understand. China’s struggle to control capital outflows and steady the RMB as regulators attempt to slowly liberalise the country’s capital account has encouraged many Chinese firms to raise funds offshore.

At the same time, more and more Chinese investors – from institutions to individuals – are eager for exposure to US dollar assets, and to fund the growth of foreign companies based in jurisdictions with strong regulatory regimes, such as Australia.

And yet, given China’s colossal size relative to most other Asian markets, in many ways the figures are misleading. In fact, the RegS market has seen a surge in issuances from lower rated countries – such as India and Indonesia – many of which are coming into the market.

Is the market too leveraged to China? Some analysts think so. For example, should Chinese policymakers suddenly loosen the reins on the anti-leverage campaign and encourage domestic issuance in RMB, China’s issuers and investors may turn their attention onshore. 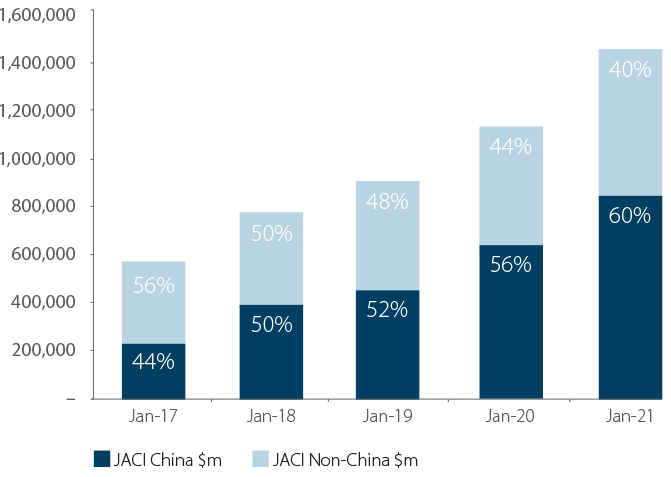 However, it’s important to remember that the diversity of Asia’s markets, and other major markets (e.g. North America, Europe, etc) protects the RegS market from massive shocks should a sudden source of issuance dry up. Singaporean, Indonesian, Indian and Vietnamese issuers and investors will likely be able to pick up any slack with their own growing RegS appetites.

As the RegS market has evolved, so too have RegS formats become more diverse, from the public to the private.

In the RegS markets, private placements are currently much more popular as a proportion of funds raised than public issuances. Moreover, the size of private placements can be very large – with deals that match public benchmark sizes increasingly common.

To tap the RegS market, borrowers should partner with banks that have robust trading and distribution platforms across the world’s most dynamic region. Issuers risk missing out on a deep pool of liquidity should they ignore the opportunity.

India is leveraging demographics and policy to grow in a world very different from when China began to rise: the eve of the Fourth Industrial Revolution.

Free and open trade has been a key driver of Asia’s development and the events in the US and Europe will not reverse the trend towards greater integration.

The geopolitical shocks of last year—namely Brexit and the election of Donald Trump—dominated global headlines, with businesses understandably concerned about how the new reality of resurgent economic nationalism might affect cross-border trade and capital flows. As we’ve argued before, it shouldn’t be a cause for overreaction.