ALONG THE MEKONG: A NEW REGIONAL NETWORK TAKES SHAPE

We are on the cusp of a better-connected Greater Mekong Region (GMR) that will play a much more prominent role in regional business and logistics. The GMR – which spans Southwest China, Cambodia, Laos, Myanmar, Thailand and Vietnam – has of course always been strategically significant, at the crossroads of economic powerhouses China and India and acting as a conduit for commerce between South China and Southeast Asia. But limited development and infrastructure have kept the GMR from fulfilling its potential as a focal point of Asian trade.

Better cooperation and a surge in infrastructure investment – much of it concentrated around the special economic zones (SEZs) that have mushroomed in the GMR’s frontier economies – are creating new transport corridors that will speed flows of goods and services and add to the GMR’s allure as a manufacturing destination. These corridors include:

North-South Economic Corridor:
Arguably the most significant emerging trade route, this is a road and rail network that will eventually link Thailand’s capital, Bangkok, with the southern Chinese provinces of Yunnan and Guangxi, passing through eastern Myanmar, northern Laos and northern Vietnam. A major bottleneck to the development of this corridor was eliminated in 2013 with the opening of a bridge over the Mekong River between Chiang Kong, Thailand and Houayxay, Laos, and further upgrades are planned to road and rail connections that are still patchy in the corridor’s northern reaches.

East-West Economic Corridor:
This corridor involves the improvement of roads connecting Mawlamyine, a city on Myanmar’s east coast,
to the Vietnamese port of Da Nang, through central Thailand and Laos, potentially linking the Indian Ocean and the South China Sea. The logistics potential presented by this corridor is a significant attraction for investors in the Savan-Seno SEZ in Laos’s Savannakhet province, at the corridor’s heart. Savannakhet’s border crossing with Thailand has seen rising bilateral trade and is also likely to encourage more firms to explore a ‘Thailand-Plus-One’ model in which Thailand remains the main manufacturing base but some capital-intensive processes are shifted to Laos, where electricity rates and wages are lower.

Southern Economic Corridor:
This runs from Myanmar’s Dawei port through central Thailand and Cambodia to the Vietnamese ports of Quy Nhon and Vung Tau, along Cambodia’s national highway 1. The Cambodian SEZs located on these routes will enjoy a prime position in this wider network. Our study showed that the Dragon King SEZ, on highway 1 near the Bavet checkpoint on the border with Vietnam, is already emerging as a hub in a ‘Vietnam-Plus-One’ model, in which raw materials and processing in Cambodia feed into Vietnam’s generally more comprehensive production facilities, while skills and training are transferred in the other direction. In Myanmar, this corridor could ensure Dawei is not eclipsed entirely by the recently-launched, Japanese-managed Thilawa port and SEZ to the south, which was rated highly by investors in ANZ’s study for its solid infrastructure and lack of red tape. 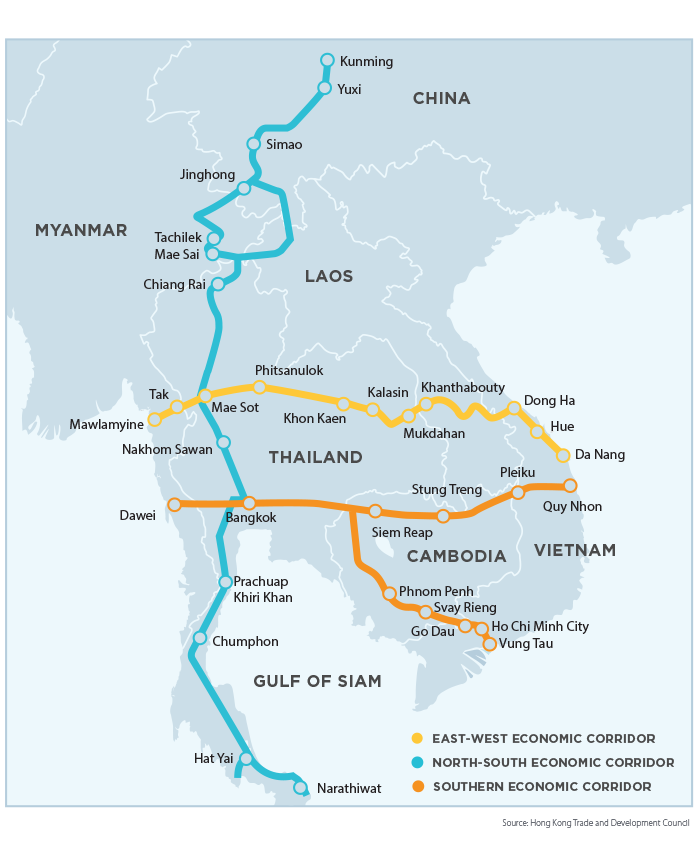 GMR governments and multilateral aid agencies have made cultivating these corridors a clear priority. The routes have exciting implications for regional production strategies, particularly when seen as part of a wider push for connectivity in Asia, evident in initiatives such as the South Asia Subregional Economic Cooperation’s effort to develop its own transport corridors and China’s One Belt, One Road program.

However, the development of these routes also has to be put in perspective. Physical barriers such as rivers or unpaved roads remain an issue, and even addressing these is only half the battle. The companies surveyed in the ANZ study unanimously identified the high cost of logistics in the GMS as a challenge, and varying customs procedures and standards continue to challenge the smooth transfer of goods over GMS borders. Only as these are addressed will the region’s corridors become true trade accelerators.

Myanmar's rapid economic transformation is a wonderful 'promise', not a foregone conclusion.

ASEAN: The Next Horizon

The ASEAN block has enormous potential as a manufacturing hub and source of world consumption.