Has iron ore found a floor?

Despite recent significant falls, iron ore should continue to stabilise in the near term.

Iron ore prices have settled at around $US90 a tonne in recent trade, following a significant decline in recent months. This is in line with recent forecasts from ANZ Research and the price should continue to stabilise in the near term.

Improving shipments, shrinking steel mill margins and the re-emergence of US-China trade tension have seen iron ore prices plunge by around 20 per cent since early July. ANZ Research believes the selling has been overdone; with supply challenges and Chinese stimulus measures keeping the market in deficit until 2021.

Shipments of iron ore from Brazil and Australia have picked up from April’s lows and are likely to steadily rise for the rest of the year as Vale slowly restarts its mining operations.

However, shipments are still weak, with July volumes down by 11 per cent year on year for Brazil and 1.4 per cent in the same time for Australia.

Moreover, the road to full capacity is a rocky one. ANZ Research thinks the market may be overestimating Vale’s ability to reopen mines. Vale’s own estimates are still two to three years away and there’s a risk of this timeframe pushing out further, meaning supply tightness will remain an issue for the foreseeable future. 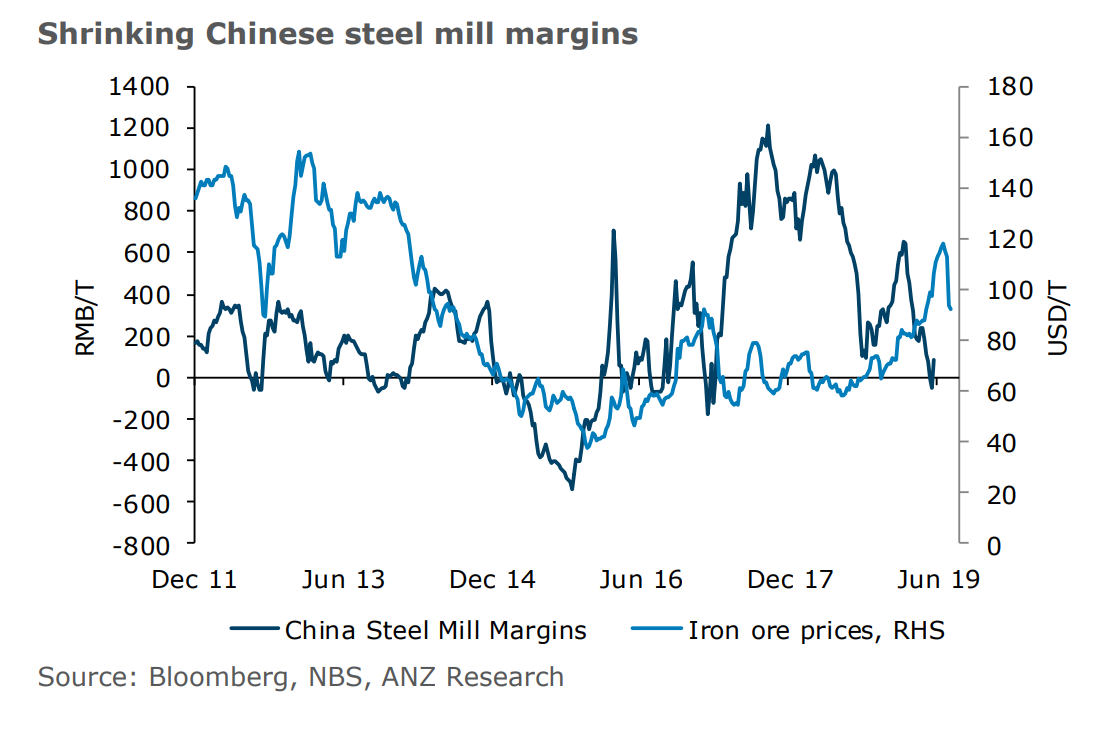 On the demand side, steel output curbs in China and ongoing trade tension with the US are key headwinds. These should result in growth in steel production easing from the 10.8 per cent achieved in the first half of calendar 2019.

In fact, July output growth fell to 4.9 per cent, year on year. Stimulus could ease concerns about demand, but we are cautious on the impact of current infrastructure projects.

This story is an edited version of an ANZ Research report. Registered clients can log in to ANZ Live for the full report.

JKM & the future of the LNG market

While Japan-Korean LNG price is not yet the official benchmark in Asia it’s clear the future of the market is more than just hot air.

The key to China’s future growth will be its productivity and how it handles its demographic challenges.